~Part One of our anniversary road trip week~

Happy anniversary to us! After 13 years, even our cards have begun to look alike, at least in the butterfly motif. Allen's choice was by far the fancier. 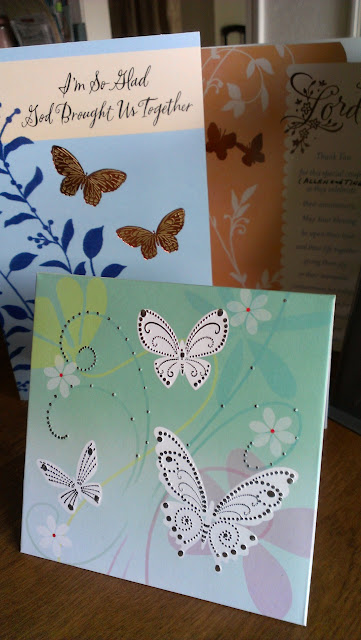 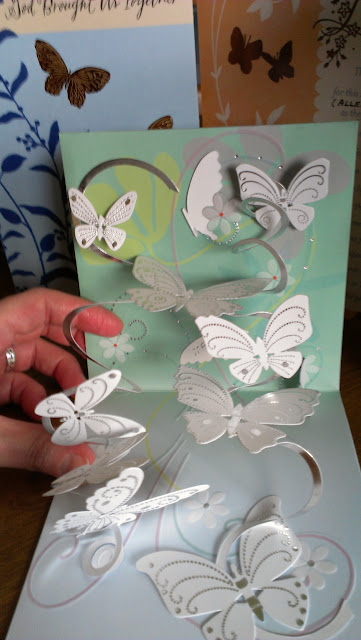 The hotel breakfast surprised us with the abundant variety, which Allen enjoyed while I stuck with yogurt and oatmeal, praying neither would stick. After breakfast, we returned to the room, hot beverages in hand, for our Bible reading. The dam broke for me while I journaled. This was not how I'd hoped to spend our anniversary, one of the two days a year we actually dress up for dinner out. Disappointment plus fear that the GI doc's initial impression was wrong and something had gone seriously awry in my esophagus made my eyes overflow.

Allen said it didn't matter as long as we spent the day together. Isn't he a blessing? He hadn't really wanted to dress up anyway. :)

I dried my eyes and we did our physical therapy exercises. It was raining, praise the Lord, so we couldn't walk outside as is our custom. Instead we went to the shopping mall for lunch and a stroll. It was unseasonably, wonderfully cool outside and in for Texas in August.

After lunch, Allen suggested that we visit the Dead Sea Scrolls exhibit (on display in Fort Worth for the rest of the year). I was wanting to see it; he could take it or leave it. His anniversary gift to me was this lovely afternoon of distraction, in the company of documents and artifacts dating to the apostolic era and before. 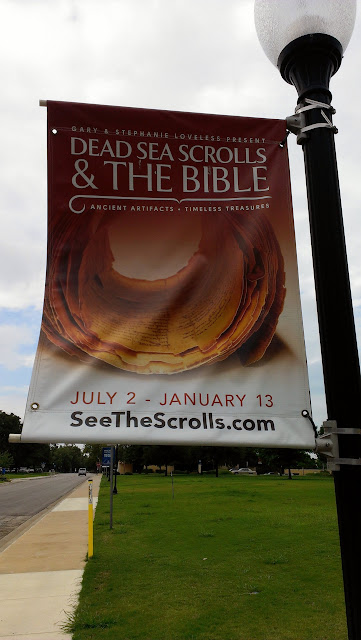 Among the Dead Sea Scrolls are the oldest known manuscripts of Bible texts. Buried in caves in Qumran for nearly 2,000 years, they were discovered accidentally by a Bedouin shepherd in the mid-20th century. He didn't know their importance, but they soon reached the hands of those who did. The scrolls bear tremendous importance for Old Testament textual studies. Every book of the Hebrew Bible except Esther is represented among them, and the text proves consistent with the medieval manuscripts which had previously been the oldest known. That the words of Scripture were copied reliably during that thousand-year gap in our manuscript evidence only increases our trust that the textual basis of our present Bible is accurate. The passage of time does not always necessitate corruption of content.

By the end of the exhibit, our feet and backs were sore and our brains full, but it was an afternoon well-spent. No photos were allowed in the exhibit hall, but Allen managed this phone camera self-portrait at the exit:


We stopped at Smoothie King afterward, because I was actually hungry for the first time in 4 days. Note to self: the Peanut Butter Power smoothie in the chocolate base is like drinking a Reese's peanut butter cup. It was as perfectly satisfying as non-solid food could be. Back at the hotel, we rested and enjoyed more cerebral, highbrow cable television programming (Yukon Gold Rush). Can you guess who had control of the remote? I'm not sure if it was meant to be funny, but we laughed a lot.

Our 13th anniversary supper consisted of Chick-Fil-A for Allen and frozen yogurt for both of us. My black dress and pearls are back in the closet until my next birthday. (Change in plans #4)
Posted by tinuviel at 10:30 AM