On previous episodes of Best-Laid Plans...
Part One
Part Two

Once again, we began with yogurt for me and the full breakfast buffet for Allen. (I might be just a tiny bit obsessed with food right now. Can you tell?) Swallowing had definitely improved with the new and increased medications, but I didn't want to push things. After a brief quiet time, Allen suggested we explore a park Google Maps had found nearby.

The skies had cleared, the air remained cool, and it was a beautiful day to walk in a park that felt far removed from suburban Fort Worth. Ordinarily, we never plan outdoor activities for our anniversary, since it's predictably 100F in the shade in late August. Change in plans #5 was such a pleasant one! 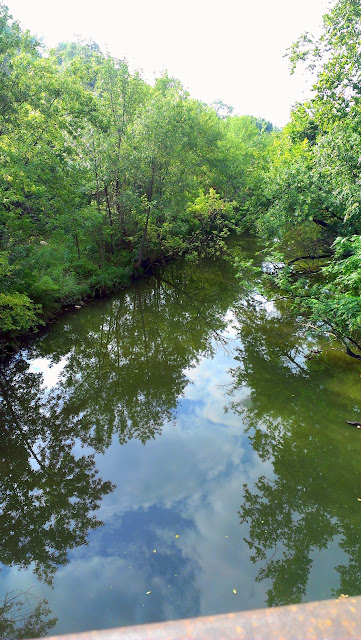 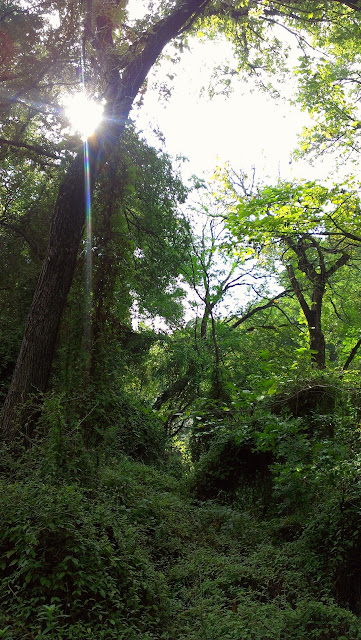 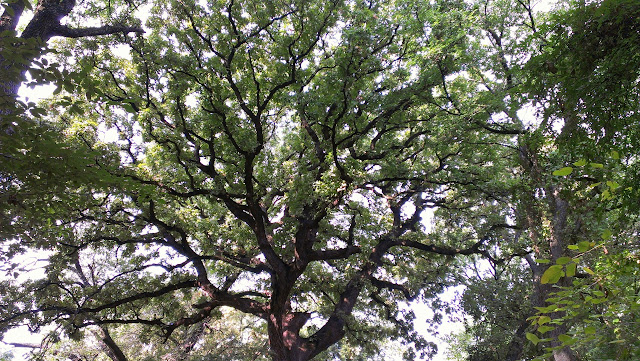 When I was walked out, we returned to the hotel to pack, clean ourselves up, and check out. By this time, I had reached my limit on sweet, soft foods. This does not often happen. Happily, we found some cheddar broccoli soup for me and a hearty salad for Allen for lunch. The thick, salty soup tasted as good as Thanksgiving dinner to me, and the broccoli was in such tiny, tender pieces that I could swallow it easily. Thank You, Lord, for the idea and the provision.

Day 3 of our trip was my grandmother's 90th birthday. She wanted family to come by only a few at a time so we could actually converse, and she allowed Allen and me to share her birthday afternoon with cupcakes and coffee.

I had prayed about this time, since Nonni didn't know about our week's adventures and my swallowing issues. It felt like my swallowing had improved enough with the dietary and medication changes that I could manage a moist cupcake if I took things slowly and stopped at the first sign of trouble. Allen agreed, so we returned to the mall, where a cupcake bakery offered at least a dozen flavors each day. After much discussion, we made our selections, bought coffees, and drove to my grandmother's house.

Happily, this part of the day went just as planned and hoped. All three of us enjoyed the visit, and the cupcakes went down smoothly. 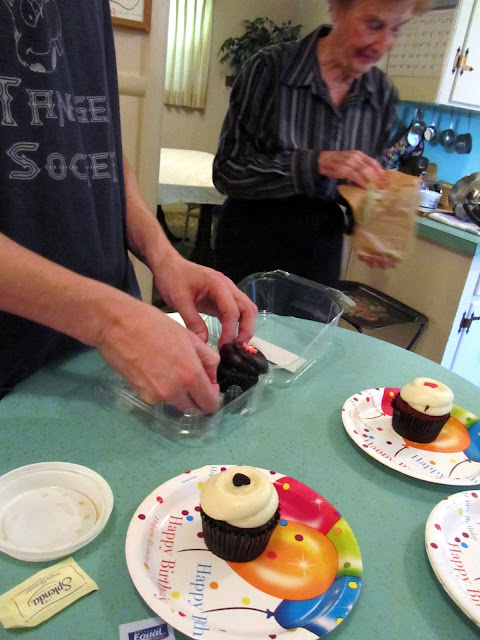 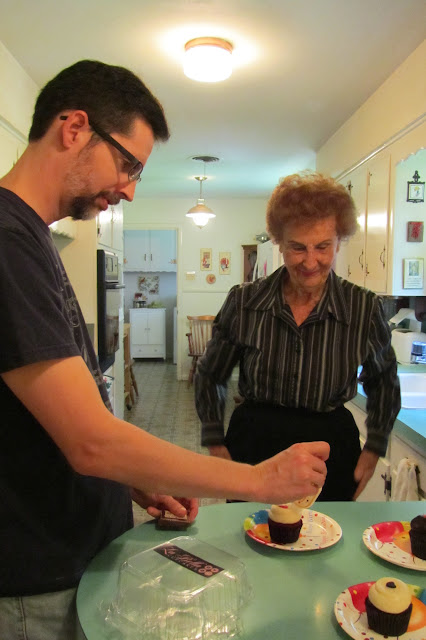 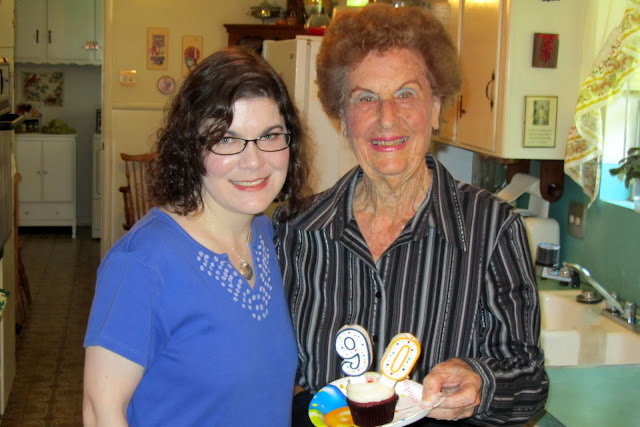 We stopped at our local pharmacy on the way home, only to find that the prescription I needed in preparation for Friday's scopes had not been filled. Calling the doctor, I discovered it had not been called in. That would be change in plans #6. Allen agreed to drive to the medical office at lunch the next day and bring the medicine home to me so I'd have it in time. (See? I told you he was a blessing.)

We returned to Wits' End late in the afternoon, weary and glad to be under our own roof again. The road trip was not what we'd planned, but it actually went better than the previous two I'd been involved with.

With much gratitude, we ended the day with burgers from our favorite local place. Taking things slow, with tiny bites and long chewing, I was able to finish a child's burger. This was to be my last solid food until after the procedures Friday, so it seemed worth attempting a real meal.

The procedures went smoothly and revealed a few minor issues. The doctor stood by his original statement that nothing about my story sounds like esophageal disease to him. His visual inspection showed no esophageal reason for swallowing difficulty or chest pain.

The specific possibility raised by my lupus doctor would not have been apparent on this test in any case. It is our option whether to request another test for that condition, but the issue is not treatable, so the GI doctor advised that we weigh the cost and discomfort of the test against the psychological benefit of knowing whether or not the possible diagnosis is an actuality. We have not decided yet and will wait at least until the biopsy results return in the next week or so.

Remember that pesky car key? Yes, it was still firmly lodged in the ignition.

My appetite still had not returned to normal by Saturday night, but we planned a second attempt at an anniversary date anyhow. While I gussied up, Allen went to the next town north of ours for an appointment.

Around the time I was expecting a text from him that he was on the way home, my phone rang from a number unknown to me. It was Allen. He had locked that key in the car with his phone. The set of keys in his pocket was the set without the spare car key. He had called roadside assistance for a locksmith, but it would be 45 minutes before his arrival. (We are a one-car household, so for me to drive the extra key to him was not an option.)

An hour passed. An hour and a half. I was on the phone with my parents trying to figure out what to do next when the garage door opened and the Ebony alarm went off. It was Allen, brought home by a friend to get the spare key so he could return, unlock the car, and drive home. By this time it was 7:45.

Later, he related to me that he had called roadside assistance back on his friend's phone, only to be reassured that the locksmith was at the car right then. "Um, no. No locksmith here." As it happened, the locksmith had arrived in the area early but been unable to find the exact location. He called Allen's phone for additional details 4 times, but he had received the number for Allen's own cell phone, which was locked in the car, instead of for the borrowed phone, which was in his hand.

Change of plans #7 meant my salmon and his steak were carried out to our own table at home and a streaming video on the television.

Tomorrow the car goes to the dealership for key extraction and ignition repair.

That is, unless there's a change of plans.

When Allen took the car in, the mechanic "pulled a Fonzie," in Allen's words, by pounding the steering column with his fist three times and pulling the key out. That key had stuck because the grooves were worn down. Eventually, the whole cylinder will need replacement because the shavings worn off the old key remain inside, but for today a new key proved adequate. In another unexpected grace, the mechanic only billed us for the key.

Thank You, Lord,
that Your grace, mercy, and love never change with our changing circumstances;
that You gave us senses of humor to cope with unpleasant changes;
that we spent our anniversary together;
that You gave me a husband who values that more than his own agenda;

for that beautiful park, so unlike our own, and strength to walk together;
for Nonni's birthday and sharing it with her;
for cupcakes, kids' meals, and carry-out;
for the joy of coming home to one's own bed;
for initially positive news from Friday's tests;
for getting it done and over with;
for Your presence with me;
for a nurse able to start the IV smoothly;
for better swallowing yesterday and today;

for plans made,
for plans changed,
for a new week and fresh start.