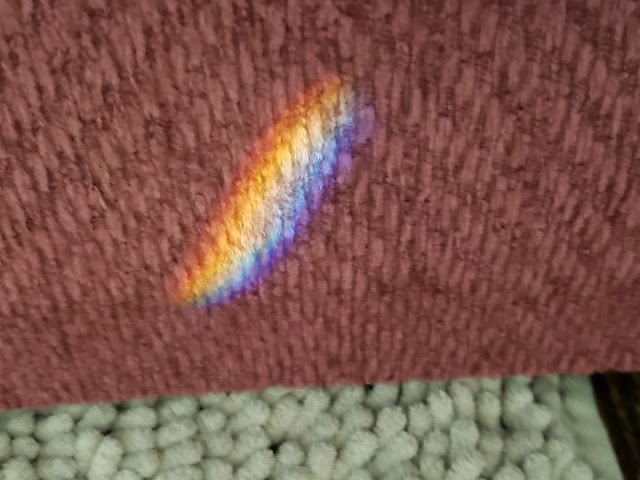 Wednesday morning, the timpani roll of thunder woke us before the alarm sounded and kept waking us until we surrendered and arose. The crash of giant cymbals made me jump during my coffee and Scripture tryst.

In the hard year we've walked through, I find myself praying for a rainbow every time it rains. Rainbows have never been memorial stones in my life,  but somehow the promise of God's stayed hand, His bow aimed heavenward, suits the spirit of the season.

He has answered with a patch of rainbow moving across my kitchen wall, with a rainbow baby blanket that grew from a yarn sampler, with a fragment of rainbow in the clouds on a mostly sunny day as I drove to my first mammogram since breast cancer.

Wednesday my prayer was disappointed. No rainbow through the rain for me.

Today, I sat in my reading chair with a cup of tea after the first flurry of morning chores, and behold--

A beautiful, full-spectrum shard of stained glass on the skirt of the ottoman. It didn't last long, but the Lord drew me to that chair at the perfect moment for Him to answer my prayer.

Lord, redeem our misbegotten or mistimed prayers. Give us bread when we ask for stones, fish when we ask for serpents. When we ask for good things, and You ask us to wait, redeem the waiting with answers tinged with the deep Narnian magic that fits a whole world into a wardrobe. Thank You for Jesus, the most wonderful surprise of all, in whose name I pray. Amen.

Posted by tinuviel at 1:00 AM No comments:

Sickness in the house.
Unaccustomed weakness,
Sleepless nights-
"We must send for Him."
A message sent -
"Your friend is sick."
No demands.
He knows the need;
He loves us;
He will come.

Counting the hours,
The miles-
The patient takes a turn.
Lamplight vigil-
Not much time left.

He’s coming.
I knew He would!
Or else-
The official’s daughter-
A healing at a distance?
"Not unto death…"
He loves us;
He will heal my brother.

Within hours,
A sudden change
For the worse.
Where is He?
Why hasn’t He come?
Unexpected delay wakes
Doubts of His love,
Not knowing
His underestimated love
Wakes deeper faith.

Lazarus dies.
"Not unto death?"
Remembered healings…
Perhaps still-?
What agony of despairing hope,
As days and night blur
In the perpetual midnight of my tears.

One day passes,
Two,
The third day-
Soul takes flight,
Hope gives out,
Shut away with Lazarus
Behind the stone wall of death.

Children running,
"He’s coming!"
Too little, too late.
Sitting here,
Surrounded by these shards of shattered dreams,
Left staring at the gaping wound
Where Love once was…
Why does He come?
He didn’t love enough
To keep Death away.
Why now?

Let Him come, then.
And let Martha meet Him.
I doubt He even notices
I’m not there.
If He really cared,
He would have hastened to our need.
How could I have been so foolish
As to trust Him?

"This sickness will not end in death…"
If He deceived us once,
What of the rest?
I should have known
It was too good
To be true.

"The teacher is asking for you, Mary."
He noticed.
Have I misjudged Him?

Running,
Half-blind with tears,
Crumpling in a heap at His feet,
Full of compressed questions,
Accusations exploding into sobs--
"Lord,
If you had been here…"

The look on His face…
Bull’s-eye.
But the bow splintered
In my mouth,
The shared pain in His eyes
Puncturing my bitterness.
He did love Lazarus.
Surely He could have –

Fresh tears,
Ashamed to rejoice,
Ashamed not to…
He does love,
Loves me,
Loves us.
I believe;
Have mercy on my unbelief.

A banquet-
Jesus there.
No sitting in the house this time!

I will trust you
With my brother,
My sister,
Myself,
My tears.

No more playing it safe,
Holding back a little something
Just in case.

Empty me of every last hoarded drop
Of cherished treasure
That keeps me at arm’s length
From You.

My all is Yours.

The relic of my doubts-
Perfume purchased for the corpse
Partaking of the feast-
Alabaster doubts
Shattered at His feet,
The expensive fragrance
Of true faith,
The costly lesson
of trust against all evidence.

Marah no longer.
Made sweet by merest contact with His feet,
Whose sweetness fills the house.

Posted by tinuviel at 6:57 AM No comments: 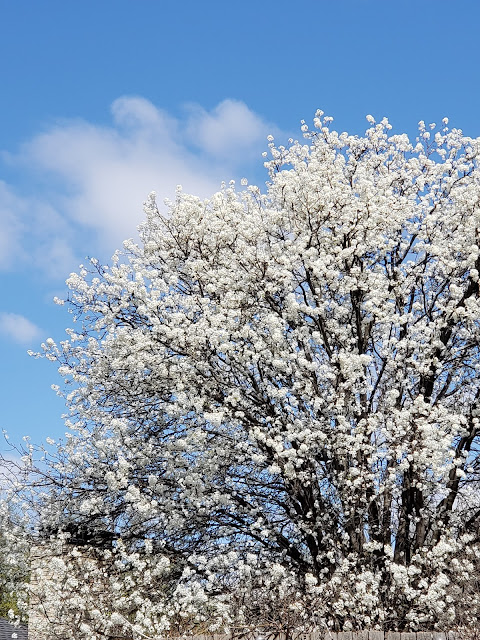 “Oh, this day, let your people feel that there is now no condemnation for them.
Let them feel
the completeness of the washing Christ has given,
the fulness of the righteousness he has imputed,
the eternal vitality of the life he has endowed,
the indissoluble character of the union
by which we are knit to Christ
with ties that never can be broken.
May we today rejoice in Christ Jesus and have no confidence in the flesh.
May we write upon our hearts these blessed words:
"filled [with] all the fullness of God" (Ephesians 3 v 19).
May we know that we have all that we can hold.
And may we pray to be enlarged,
that we may take in even more of Christ
than we have yet received.
For he is all ours, altogether ours,
and ours world without end.”
Charles Spurgeon (1834-1892)
From Ocean of Grace by Tim Chester
Posted by tinuviel at 2:57 PM No comments:

In honor of Women's History Month, may I introduce you to five of my heroes? Through their words, these women have mentored me for decades, though they have already preceded me into the presence of the Lord. 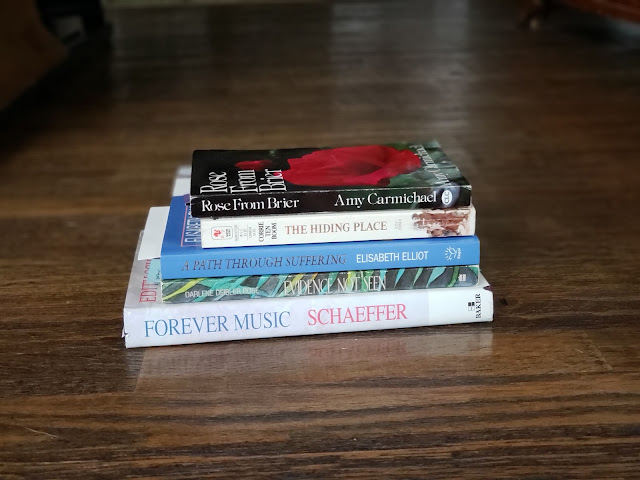