In addition to the 17 butterflies we sheltered and fed from the caterpillar stage to their readiness to fly into the world, we have discovered a half-dozen empty chrysalides scattered around the backyard. They attached to the trim board at the top of the fence. The Lord didn't need us to save them, clearly. The butterfly sanctuary was a blessing He gave us.

In addition, in mid-October I discovered a chrysalis in its final day, suspended like a parachute from the underside of several leaves of a vine. The chrysalis takes a fortnight, more or less, for the transformation within. The caterpillar is attached and immobile for more than a day prior to that. For more than two weeks, this caterpillar-turned-chrysalis had hung precariously with no possibility of fight or flight. During that time we experienced at least a week's worth of extremely windy days and one night of severe thunderstorms with even stronger winds, lightning, and very heavy rain. As delicate as the cords of attachment appeared, it outlasted and overcame what looked to me like impossible odds.

As I said, I didn't discover this chrysalis until the black and orange of the wings were clearly visible. From that, I knew the butterfly would likely emerge the same day. After several progress checks, I peeked at it one more time on the way out the door to a medical appointment. By the gracious providence of God, that was the exact moment it emerged. What a joy to behold!

Here is the slideshow/video of that experience. May it give you joy and a taste of awe to brighten your day.

Posted by tinuviel at 1:00 AM No comments:

(Many thanks to Jonathan Gibson's children's book The Moon Is Always Round for this idea. Affiliate link.)
Posted by tinuviel at 10:50 AM No comments:

"Continue steadfastly in prayer, being watchful in it with thanksgiving."
Colossians 4:2 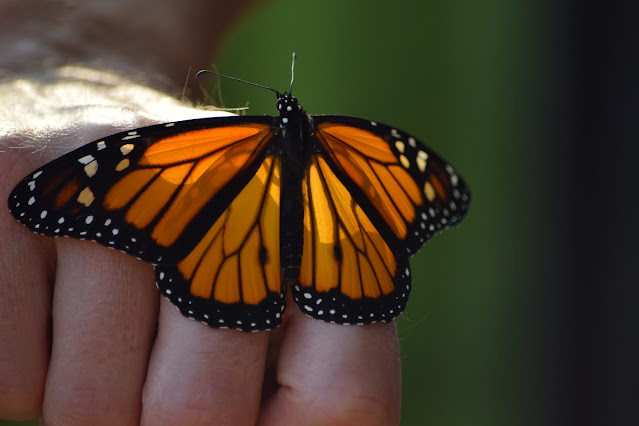 To prayer, O Lord,
Let me devote myself;
I cannot do even that without Your grace.
Make my prayers continuous,
Persevering,
Vigilant,
And grateful:
Continuous as the soundtrack of my day,
Conversing with You throughout the miraculous mundane,
Bringing the never-ending cavern of my needs
To the superabundant sufficiency of Your grace;
Persevering,
For waiting is wearisome,
Delays are long,
And distractions and discouragements are many
(One thousand years may be as a day to You,
But a thousand years is still a thousand years to me);
Vigilant,
For the enemy seeks to devour and destroy devotion,
And temptation waits ready,
Incendiary arrows fitted to the stretched bow
For the moment my shield drops;
And thankful,
For I deserve only hell,
And You gave me Jesus,
And with Him all I need and more;
For His blood opened this ragamuffin's access to Your throne;
For His Spirit alchemically transforms my dusty prayers
into the golden glory of Your will;
For Your power and love answer in the best way,
No matter how it appears to my finite, fallen sight.
Mark this day with Your fingerprints.
Keep drawing the eyes of my heart to Yourself.
Make my life a eucharistic* sacrifice,
For Your glory, my good, and the growth of Your kingdom.
Amen.
*"eucharistic" meaning, here, "having to do with gratitude or thanksgiving," from the Greek words for giving thanks, gratitude, etc.
Posted by tinuviel at 11:08 AM No comments: 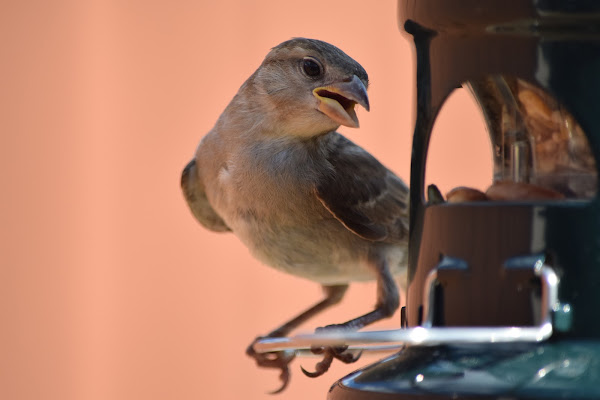 In heaven shall be such great joys as no geometrician can measure;
so many joys as no arithmetician can number;
and so wonderful as no rhetorician can utter,
had he the tongue of men and angels.
Here shall be joy within thee,
joy without thee,
joy above thee,
joy beneath thee,
and joy about thee.
Joy shall spread itself over all the members of your bodies
and over all the faculties of your souls.
In heaven,
your knowledge shall be full,
your love full,
your visions of God full,
your communion with God full,
your fruition of God full,
and your conformity to God full,
and from thence will arise fulness of joy.
~Thomas Brooks (formatting mine)
Posted by tinuviel at 2:00 AM No comments:

Once Upon a Wardrobe {Book Review}


"Mr. Lewis said something like this about imagination.' I stop and think back; I don’t want to misquote him. “‘Whenever you are fed up with life, start writing: ink is the great cure for all human ills’” (Galley Kindle location 580).

Once upon a wardrobe, not very long ago and not very far away, a middle-aged girl, weighed down by the death, disease, disaster, and dissension screaming from the headlines, opened an email from a book review site. She had resolved not to agree to any more review books at present, but there it was: the cover artwork showing the dreaming spires of Oxford at blue hour, a Narnian lamppost garlanded with fresh snow in the foreground, the fairy-tale title Once Upon a Wardrobe, and a tiny lion’s head like a door-knocker inviting her into whatever adventure Aslan might have within. Resolve crumbled in the face of such a summons.

“Yes, please and thank you,” she clicked.

When the galley eBook arrived in her inbox, she dropped everything to begin reading. As surely as Alice fell into Wonderland or Harry fell into Dumbledore’s Pensieve, she promptly fell into this tale of Oxford don C. S. Lewis helping a brother and sister learn to live in love, grief, and hope, all bound up together. The story raised the hair on the reader’s arms in prickles of wonder, brought a chuckle to her throat and a smile to her face, and repeatedly reduced her to tears as she read her Kindle in the backyard pool. It gave the sheerest, purest delight she’d felt in many weeks.

“George knows you can take the bad parts in a life, all the hard and dismal parts, and turn them into something of beauty. You can take what hurts and aches and perform magic with it so it becomes something else, something that never would have been, except you make it so with your spells and stories and with your life.” (Kindle 2306).

In Once Upon a Wardrobe by Patti Callahan Henry (Harper Muse, October 19, 2021), Megs Devonshire studies mathematics at Oxford and dreams of one day becoming a professor and unraveling the mysteries of the universe through logic and mathematical reasoning. She remains aloof from the exuberant social life of her peers, however, spending most weekends traveling to and from her home village. You see, her beloved brother, George, is dying of a heart condition and unlikely to see his ninth birthday. He has developed an obsession with the recently published children’s book TheLion, the Witch, and the Wardrobe, by C. S. Lewis, and he knows Lewis happens to be a tutor at the university his sister attends. His dying wish is to find out from Mr. Lewis where Narnia comes from, where all the stories and places in his book come from.

His sister resists at first. It seems romantic nonsense to her mathematical self. After all, Mr. Lewis is quite famous and teaching in one of the Oxford colleges where no girls are allowed in the 1950s, so how on earth is she to meet him and ask her brother’s questions? She even considers making an answer up and lying to her brother about having done his bidding, but ultimately she can’t bring herself to do that. She devises a plan to try to meet Lewis at his home, and while she sits outside screwing her courage to the sticking place, Lewis’s brother Warnie discovers her and invites her inside the home he shares with “Jack” for tea.

The many lengthy conversations that ensue don’t exactly answer George’s questions, and yet they do. In the process, Megs has her own ideas turned upside-down: ideas about imagination, reason, and whether a made-up story can, even so, tell the truth in a way a mathematical equation cannot. She finds friendship, mentorship, love, and the surprise of joy along the way. The world-weary girl reading her adventures discovers the closest thing she’s ever experienced to a second first time entering Narnia, and the nearest thing to tea with Jack and Warnie at theKilns.

“'Have you felt it, sister? Have you felt that joy?' I want to answer him. I close my eyes. 'I think so. When I solve a problem or equation that seems impossible, it’s like there’s some kind of light breaking through, or the knowing leads to some kind of satisfaction . . . and maybe joy. Or when I walk outside on a spring afternoon and the first crocus is born from the snow and the sunlight runs across the spider webs like messengers from tree to tree, that’s when I remember something, something I’ve forgotten and is waiting for me, something . . . larger than me. And then it’s gone. And I want it back. I think that’s what Mr. Lewis is talking about.' 'Like when you finish a story and you wish you could read it like you’d never read it before. Like you want to read it for the first time again,' George says" (Kindle 1235).

Readers familiar with the non-fiction work of C. S. Lewis may experience some déjà-vu, as many of the facts incorporated into the story appear in Surprised by Joy. Ideas from his literary criticism, Mere Christianity, Weight of Glory, The FourLoves, and his letters to children also make their presence known. Even so, the whole far exceeds the sum of its parts. Ms. Callahan has clearly dwelt with her extensive research to the point that the ideas come out as if they were her own.

Readers not familiar with the life of Lewis and his non-fiction work will likely find this an accessible and delightful point of entry. The bibliography was not yet ready in the galley copy I enjoyed, but I expect that it will point readers in the right direction if they wish to read more. If readers of this new book have not yet read The Lion, the Witch, and the Wardrobe, I would suggest reading that first, or at least pausing to read it when Megs does in the newer book.

Warning: common side effects of this book include impulsive binge-reading of the Narnian stories and other Lewis works. And those of George MacDonald. And a blown book budget.

All in all, Once Upon a Wardrobe earns my most heartfelt and earnest recommendation. The way it braids love, grief, and hope together is magical and healing. It overflows with another of Lewis’s favorite ideas, Sehnsucht, that homesick longing that Lewis considered to be proof we were made for another world. The story works as story, but also explores the mystery of what can only be understood through imagination, the paradox that fiction (or “myth”) can convey some truths in a way nothing factual can, and the narrative escape that—at its best—is not escapist but equips the reader to return to life outside of the book we’re reading.

Once upon a wardrobe, not very long ago and not very far away, a world-weary middle-aged girl found deep and needed soul refreshment in this winsome story about sibling love, friendship, and the marvelous mystery of great books. She hopes you read it too.

To purchase this book, scheduled for release on October 19, 2021:

{All of the Amazon links herein are affiliate links. This author will receive a few pence per purchase made through them.)

Posted by tinuviel at 1:17 PM No comments: