The mind of man plans his way,
But the Lord directs his steps.
Proverbs 16:9, NASB

Last week we took a brief anniversary road trip. For most of the trip, I couldn't swallow solid food comfortably. For all of the trip, our car key remained stuck in the ignition. The week concluded with upper and lower GI scopes for me and generally bore very little resemblance to the vacation in our imaginations. That said, God cared for us well, and we spent our anniversary together. We are grateful.

Just so we're clear, today I'm writing this down for myself as much as anyone. It was a roller coaster of a week, and writing will help me come to terms with it. It won't hurt my feelings if you stop reading now. :)

Last week Allen spent the three personal days accrued so far at his new job. His idea was that we take a mini-vacation for our anniversary. Even though we were only headed an hour and a half away to the other side of the Metroplex, I had some anxiety about my first overnight trip in almost 2 years.

Nonetheless, we made the plans and arranged a visit to my grandmother's house on the third afternoon, which happened to be her 90th birthday. By God's grace, I got the packing done without a spike in pain levels. We made Ebony's kennel reservations and took him for a day of daycare the previous week to ease him into the new environment. He hadn't had an overnight trip in 2 years, either.

We woke early on day 1. At breakfast, it concerned me that my tiny prednisone pills weren't going down smoothly. In late spring, I'd begun having trouble with the biggest pills in my case, but I attributed that to the dry mouth another medication has caused. Two days prior to our departure, one of my calcium pills lodged uncomfortably in my esophagus for the course of an evening. Never had I had a hint of difficulty swallowing these smallest pills until today.

Only 6 days previously I had met with a gastroenterologist for the consultation recommended by my new lupus doctor. At that time Dr. T, the GI specialist, said (and I quote), "Nothing about your story says esophageal pain to me. Everything about what you're telling me points to musculoskeletal pain or maybe nerve ending pain." Despite that conviction, he recommended an upper and lower scope of the digestive tract because of medication side effect risks and family history. It didn't seem urgent, so Allen and I consulted and chose the next available date when he had no medical or work conflicts: September 7.

Now suddenly that seemed a long way off. While Allen packed the car, I called the doctor to change the appointment to the next available, which was this past Friday. A message was also taken down for the nurse about my symptoms, to see what could be done in the mean time. If you're counting, that would be change in plans #1.

Swallowing lots of water in an attempt to wash down the medication, I finalized preparations to leave the house. We double-checked locks and lights and headed on our way. Ebony was not happy about being delivered to the kennel, but he handled himself better than he had in the past. Deep breath. We're really doing this!

A dramatic increase in the number of trees marked our drive west. This part of Dallas-Fort Worth had had a much wetter summer than our town. So much green for August! 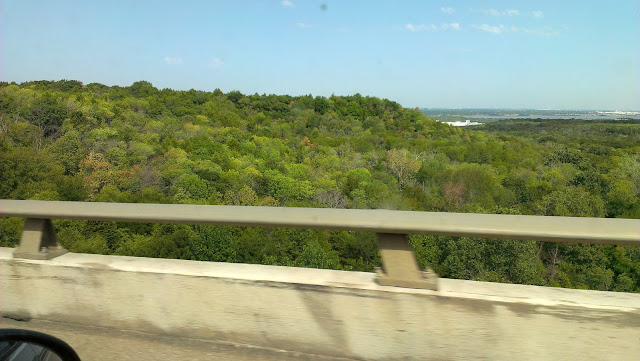 We first stopped at Allen's sister's house to see her family, including her Army son on leave from Afghanistan, and their parents, who were visiting. When we pulled into her driveway and parked, we discovered change in plans #2: a key that refused to budge from the ignition. 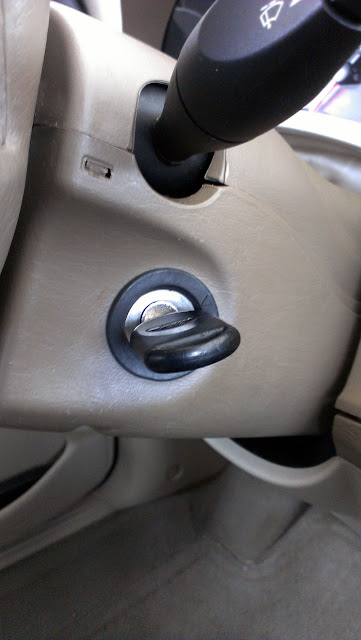 Lunch was not yet ready, so Allen and his dad worked on the key to no avail while I brought his mom and sister up to speed on my latest medical adventures. After lunch, which was delicious even though I was not able to eat very much, Allen left to pursue some leads on mechanics while I fielded phone calls from the doctor and listened to our nephew's tales of dropping body bags full of water bottles from a helicopter to resupply troops in remote locations.

Good news: one of the mechanics knew exactly what the problem was and had just fixed the same issue on another car. Bad news: the only employee with the certification to handle the electrical part of the repair was not in that day.

Good news: the doctor quadrupled my reflux medication, which to this point had only been to prevent side effects from another medication, and called in a prescription for "grasshopper slurry" to the pharmacy adjacent to our hotel. This liquid would cool and numb my esophagus so I'd at least be more comfortable. Bad news: that super-convenient pharmacy lacked one ingredient in the prescription and could order it for preparation the next afternoon. Good news: the excellent pharmacy assistant offered to call other local pharmacies until she found one with all the ingredients on hand. (Change in plans #3)

When our family visit concluded, we drove a while longer to our destination hotel to check in, unpack, and wait for the pharmacy to notify us that the prescription was ready. [Cue Final Jeopardy music.] They actually completed the order ahead of schedule, and not a moment too soon by my reckoning. This turned out to be a family-owned pharmacy more than 50 years old. I liked the vintage signs, but perhaps that was just my relief to have help at hand. 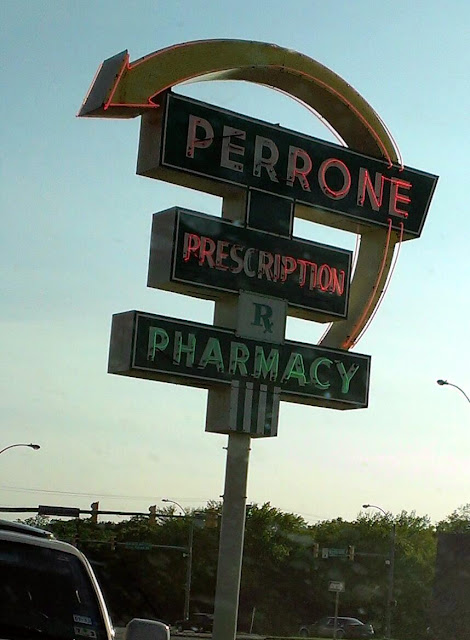 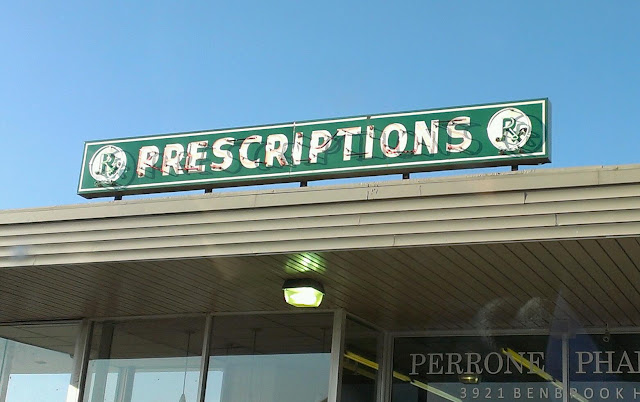 The "magic mouthwash" really did help, but swallowing solid food was still problematic enough that I stuck to mashed potatoes and the softest vegetables at supper and still couldn't clean my plate.

One of the GI problems my rheumatologist is considering as a possible new explanation for my chest pain involves changes to the muscles of the lower esophagus. Often this particular ailment goes undiagnosed until a patient appears at the emergency room with food lodged in the esophagus. I did not want this to happen and decided to stick with smoothies, yogurt, and only the absolutely essential medications until we returned home.

We spent the evening relaxing in front of horizon-expanding television like Call of the Wildman, which at any rate got us laughing after a day full of the unexpected.