The Dog Who Helped Me Become Real

"Generally, by the time you are Real, most of your hair has been loved off, and your eyes drop out and you get loose in the joints and very shabby. But these things don't matter at all, because once you are Real you can't be ugly, except to people who don't understand" (The Skin Horse, from The Velveteen Rabbit). 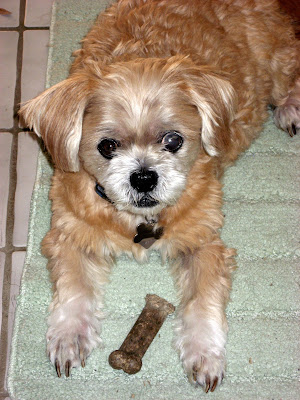 The summer of 1993 marked the middle of the most difficult season of my life to that point. Two years prior, a difficult decision I believed to be right and obedient had proved even more costly than I had imagined. Some of the cost was inherent to the decision, but I no doubt increased it by my lack of skills, maturity, and courage to handle the ensuing conflicts.
I sought comfort for my grief and shame in food, sleep, Scripture, spiritual reading, and desperate prayer (sometimes in that order), even while trying to reassemble the shattered dreams with duct tape and ingenuity.

By that summer, I was almost out of duct tape and ideas, and I decided with my parents' support that the next step was to buy a dog. At the time I was living in my old room at their house, no longer enrolled in college, and working at temporary clerical jobs and babysitting, yet somehow it seemed perfectly reasonable to spend more than a week's wages on a purebred Lhasa Apso. A male one, to breed with my sister's dog, Muffin.

After weeks of scanning classified advertisements and making phone calls from the breakroom at lunch, just before July Fourth we found a good prospect in Oak Cliff, a good drive southwest of us. The one snag was that I already had a childcare commitment after work that night, there were only two males in the litter, and we had learned from experience that the males sold most quickly.

My kind and longsuffering parents agreed to drive out to the breeder's house with check in hand, examine the candidates, and act on my behalf.

The babysitting evening is a blur in my memory, as all I could think about was whether my parents were meeting and picking up my dog. When I arrived back home, the lights were still on and the kitchen was full of my parents, youngest sister, her dog, and a tiny brown ball of fur who fit in my two hands.

He nestled in my lap immediately, and I was so smitten I hardly even minded the flea bites. After much deliberation, I named him Steinway.

For sixteen years, he was my most constant creaturely companion. Friends came and went; my sisters moved into their own places and one married; I met and married Allen and exchanged my parents' roof for his; but Steinway loved me without reserve or qualification through it all. He had no job to take him away during the day or move him to another city, no competing interests except the squirrels on the lawn or the occasional Nylabone.

From him I learned the power of presence, the importance of "with." As I put aside the salvage attempts and sat among the shards, he let me cry into his fur and didn't even seem to mind. He curled up on the dining room chair next to mine, whether I was up at 4 am or midnight studying. When I left, he waited for me at the front window or atop the back of the sofa, from which perch he could see both entrances. When illness woke me in the night, he found me and kept me company, and I did the same for him. He was my Velcro dog, sticking by me through whatever came. Throughout his life he made visible to me in an almost sacramental way the invisible, constant, loving presence of Christ.

I did not always love him wisely, but I hope I loved him well. His companionship and puppy needs were a gift from God to turn my focus outward again, and God brought his affection to begin to heal my hurting heart and give me many years of joy before his departure broke it again. The memory of his fur and weight is still imprinted on my arms.

He helped me live through the brokenness, rubbed off some of my sharp edges, and taught me that Real is more beautiful than "carefully kept." For sixteen years we loved the fur off each other; because of Steinway I am that much closer to Real.