No fewer than four times this week this verse presented itself to me in different contexts by unrelated people and publications:

"For I know the plans I have for you"—
[this is] the LORD's declaration—
"plans for [your] welfare, not for disaster,
to give you a future and a hope."
Jeremiah 29:11, HCSB
When the same theme or verse pop up several places in a short period of time, I tend to take it as the Holy Spirit trying to get my attention. If that's what's going on here, what am I to make of the verse choice? Is it God telling me that I'm on the mend, that I'll have a new "new normal" soon? Is everything coming up roses from here on out?

Pulling the Bible study camera in close to look at only the one verse on the macro setting (as we did with Hebrews 13:15 a couple of weeks ago) would seem to give such an impression, wouldn't it? All good news and no bad?

Zooming out through the circles of context paints a different, richer picture, however:

The context of the paragraph places this verse in the midst of Israel's banishment or exile to Babylon. The fulfillment of hope for the original readers is future, after 70 years have elapsed in their foreign home, and the content of "welfare" (NASB, HCSB) or "to prosper you" (NIV) includes not only the return to the Promised Land but also restored relationship with Yahweh. Prayers would be answered and seeking hearts would be satisfied.

Zooming out again to the chapter of Jeremiah 29 informs us that verse 11 was part of a letter from Jeremiah to the religious leaders and other Israelites taken captive and deported by Nebuchadnezzar of Babylon. The Lord, speaking through Jeremiah, tells the exiles to unpack their bags and settle down. Furthermore, they are to work and pray actively for the well-being of the place of their exile and resist the allure of false prophets saying otherwise. In other words, the verse appears in the middle of a message to make peace with this current trial, even while resting in God's promises that He has a plan and restoration will come.

Broadening our perspective once more, the whole of the book of Jeremiah provides further context for the exile and promise of restoration. Over and over God pleads with His people to repent of their idolatry and disobedience, "rising up early and sending prophets" to call them back. He warns them specifically of the consequences of their actions, yet they do not listen. Jeremiah provides an eyewitness account of the life in Jerusalem of the remnant left behind and documents God's generous, gracious promises of restoration and a day coming when He would establish a New Covenant with them which they would not break (Jer. 31).

Zooming out yet again, the historical books of Kings and Chronicles fill in the historical detail of Israel's blatant, prolonged disobedience, a steady descent through apostasy, relieved by only occasional spikes of revival.

The Mosaic Covenant in Exodus through Deuteronomy spells out which laws Israel was violating and the quite specific blessings and curses they could expect for obedience or disobedience (Lev. 26 and Deut. 28, 30). God fulfilled these promises in their exile to Babylon.

The promises to the patriarchs in Genesis, beginning with chapter 12, help us understand why God would still promise restoration in spite of such egregious wrongdoing. Before the Mosaic Covenant, God had established another, unbreakable covenant with the descendants of Abraham, Isaac, and Jacob. In faithfulness to this Abrahamic covenant, He forgives Israel's corporate sins and brings them back from exile to the land promised to the patriarchs.

Finally, the broadest panoramic perspective places Israel's exile and promise of restoration in the midst of the Triune Creator God's long-range agenda to restore and redeem not only sinful Israel but fallen humanity from every tribe and nation and to do so by means of the "seed of the woman," Jesus Christ. This Christ will someday reign over His redeemed people in a deathless, tearless new heavens and new earth.

How does all this zooming out through the circles of context help answer my original question?

It clarifies that the Jeremiah 29:11 promise is neither a fortune-cookie aphorism nor an amulet promising all pleasantness and no unhappiness. If it were, my faith might be in crisis by this time. Nor does it speak to the duration or end point of my particular health problems.

Instead, it reassures me that God has a plan in this and that even if my worst-case scenario comes to pass, the ultimate outcome is well-being and a hopeful future.

God is by nature a promise-keeper, and that includes His promises
No matter what the coming weeks hold, they can do no harm to the real, eternal inner part of me, which grows stronger even as the outer body breaks down.

The Lord does know the plans He has for you and me. They are for our welfare and not for disaster. In Christ our future and hope are secure. Those truths, in their whole Biblical context, are a firm foundation for whatever lies ahead.


Joining the chorus again, thanking God for all His gifts:
~His good plans
~His sovereign power and faithfulness to bring them about
~hopeful future because of Christ
~A. bringing roses as well as groceries home from Kroger
~rosy perfume filling half the house
~challenges to practice humility and extend patience and forgiveness this week
~the life and legacy of evangelical theologian John R.W. Stott (1921-2011)
~the arrival of the latest installment in The Hawk and the Dove series 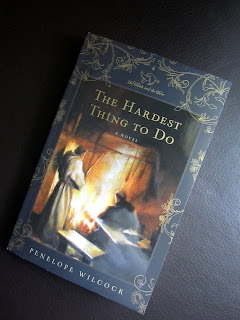 ~joy in cracking open the pages of a new book
~making A. laugh at the end of a hard day
~a cousin texting me just to see how I was doing
~Ebony bathing my feet with his slobbery canine kisses

~baked French toast with strawberries
~visiting long on the phone with my Nonni (grandmother)
~her safety so far in this hot summer (The streak of consecutive days over 100F continues; this is now the second-longest such on record for Dallas-Fort Worth, and the highest temperatures are still ahead.)
~better tolerance of the prescribed back exercises with less pain
~new pedometer arriving to replace my broken one (so I have some objective measure of activity level)
~UPS delivery people and all "brown" does for our household
~a dip in the mosquito population, one good thing from this drought
~the next stage of water rationing implemented
~even with that, we have enough clean water to drink and meet daily needs
~our bird neighbors back at the feeder after a slow couple of weeks (Where do birds go on holiday?)
~3 hummingbirds sighted at the feeder at various times
~no broken bones from a family member's bad fall
~restful week of no medical appointments (last appointment-free week expected until the end of September)
~Dave the physical therapist, with whom I work for the first time this afternoon
~A.'s company and support today
~Chick-Fil-A cooking supper tonight
~waking naturally, with no alarm, on a weekday
(from my gratitude journal, #1094-1121)