The Hardest Thing to Do {Book Response} 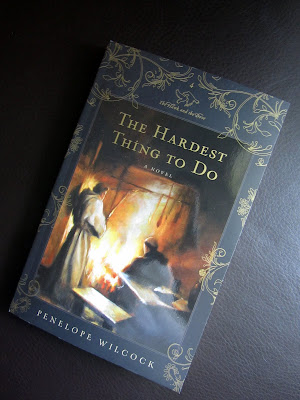 "A miracle alters the normal course of things, turning what comes naturally into something new. In the everyday world, we take a flint and a rag, or take a taper to a candle, and we make a light. We take the light to the hearth and start the fire. When night comes down and we cease to feed it, the flames die away, the embers grow cold, and all that is left is ashes....


"A miracle is not the everyday way of things--light, fire, ashes. A miracle changes everything, challenges the order we know. In a miracle God smiles and says, 'Try this for a change: ashes, fire, light." Inside a soul, when all is ashes--when a brother has become as grubby and unattractive as a bottle in the smoke--the secret fire of the Holy Spirit arises out of the kind desire of God, burning away the dross and the sin,  kindling again the precepts, the statutes, the rule of life. Fire is painful, oh, God, it is painful; there is nothing warm and cozy abotu the mercy of God as it burns away coldness and indifference. But the flowering of the miracle is luminous; there comes light that is evident to everyone who has eyes to see; the inner light of peace betokening the house where Christ lives again: resurrection, I suppose" (Father Theodore in The Hardest Thing to Do, pp.22-23).

Penelope Wilcock's new novel, The Hardest Thing to Do, rejoins the brothers of St. Alcuin's abbey to prayer walk day by day through the transitional season of Lent. This Lent proves unusually hard and unusually transitional as the community learns the ways of their new abbot and he learns to be himself in a new obedience.

Over the course of the book we learn "the hardest thing to do" for a number of the brothers, each in their turn. Some of the things are humorous, some mundane, some substantial and serious. The hardest "hardest thing," however, spans the length of the book and challenges the very soul of the community.

What is that hardest thing? To forgive.

An earlier book in The Hawk and the Dove series described the cruel humiliation of the beloved Father Peregrine at the hands of the prior of another monastery. Brother Tom, Father Peregrine's personal attendant, felt the offense at least as keenly as his abbot and responded with characteristic passion and impetuosity.

The new novel unites Brother Tom with the prior who insulted his beloved (now departed) mentor, but in this meeting the balance of power has reversed and Tom and his brethren are confronted with a choice. Will they nourish resentment and turn away a man in profound need, or will they allow God to transform them for and through the hard thing of forgiveness?

As the narrative unfolds, the reader experiences the contagious, destructive effect of even a single person's choice of resentment and also the taste of resurrection transformation resulting from even one person's openness to forgive. The emotional impact of both did not entirely surprise me, having experienced that in the earlier stories, but the breadth of the change effected did.

One sometimes hears the axiom that resentment is like swallowing poison and expecting someone else to die, but this novel portrays it more like a fire that burns away at offender, offended, and the entire community of which they are a part. Conversely, forgiveness (in Father Theodore's language) is a miracle which brings warmth and light out of death and ashes and enlivens not only forgiver nor merely forgiven but the entire community as well.

Upon reflection, this depiction seems more truthful than the more common and simpler simile. Forgiveness is indeed a corporate discipline, and resentment a communal sin. Both are personal, but neither is private. I have witnessed this but did not understand so well what I was experiencing before I walked with these fictional medieval Benedictines through one Lent of their journey towards Christlikeness.

Other comments on structure, characterization, themes, and style could be made and would perhaps be more germane to a proper review, but today I'm inclined to limit my comments to this response instead. The Hardest Thing to Do is a wise book and one I hope to keep learning from in days to come in my non-fiction relationships.

Considering forgiveness with the community at Ann's...