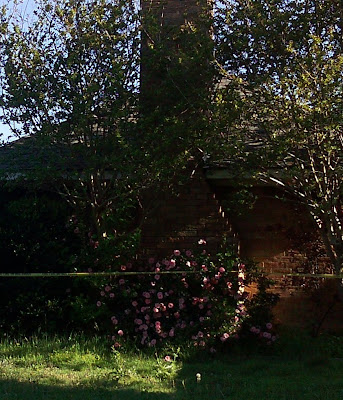 In spring 2009, a house in our neighborhood burned to a brick shell from a fire that began in its backyard.  Walking past a few days later with Ebony, I observed that the pink rosebush against the front wall of the house had burst into bloom.  The blossoms made a spectacular and dramatic display.  To me, they also spoke of God's promise to give His people beauty for ashes.  This image reminds me of the story under consideration today, that of the fourth woman listed in Matthew's genealogy of Christ in chapter one of his gospel.

So far we have examined the stories of Tamar and her father-in-law's broken promises; Rahab and her morally broken past; and Ruth, with her broken dreams of happiness in her homeland with the husband of her youth.

Fast-forward 3 more generations from Ruth, and we come to Bathsheba.  Matthew identifies her not even by name, but as “the wife of Uriah.”  However, the man beside her in the portrait gallery is not Uriah, but . . . Oops!  I’m getting ahead of myself.  We read her history in 2 Samuel 11 and 12.

David, the great-grandson of Ruth and Boaz, is now on the throne of Israel.  One spring, he sends his top general into battle but opts to stay home in luxury himself.  After a late afternoon nap, he takes a stroll on the rooftop and sees a beautiful woman bathing.  Upon inquiry he learns that she is the wife of Uriah, one of his leading soldiers, but that doesn’t stop him.  Since he knows Uriah is away fighting, he sends for Bathsheba, she comes, they sleep together, and she conceives a child.  When a hasty attempt to cover their tracks fails, David has Uriah killed and marries Bathsheba himself.

God sends a prophet to confront David about his sin, and he repents.  His sorrow is recorded for us in Psalm 51.  The child of their one-night stand dies, but soon Bathsheba gets pregnant a second time.  Out of all David’s sons from all his wives, God chooses this one to succeed David on the throne and names the child, “the Lord’s Beloved.”  History knows him better as the wise king Solomon.

In a nutshell, then, Bathsheba cheated on her husband, and her lover then had him murdered to conceal the affair.  Even this marriage, broken at her own hands,  did not disqualify her from receiving God’s grace and being used of Him.  On the contrary, she became the mother of Israel’s wisest king and a foremother of Jesus.  Truly, God brought grace and beauty out of the ashes of her first marriage.

Perhaps you see yourself in this portrait.  Have you blown it so badly that you don’t think God could possibly use you?  Sinned so horribly that you think God couldn’t love you anymore?  Think again!  Failure is never final with God.  The blood of Christ is pure enough to cleanse the worst of sins, even mine, even yours.  Friend, here’s good news and a prayer for you from David’s Psalm 51: