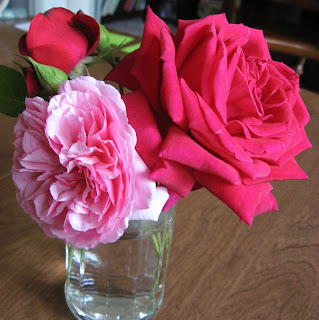 Previously in our exploration of the five women Matthew mentions in Jesus' genealogy, we have looked at Tamar, who experienced God's grace for her father-in-law's broken promises, and Rahab, who found grace for her broken past.  The third named woman appears in the very next generation, and her name is Ruth.

Through Rahab’s help but mostly the power of God, Israel does conquer Jericho and the land promised to Abraham.  Sadly, as soon as Joshua dies they fall into sin, idol worship, and economic recession.  The family of a man named Elimelech crosses the border into Moab (historically an enemy of Israel), hoping for better prospects.  On the contrary, Elimelech dies in Moab; his sons grow up to marry Moabite women, and then they, too, die . . . childless.

Elimelech’s widow Naomi packs up to return to Israel.  She is too old to hope for more children to provide for herself or her daughters-in-law, but one of them, named Ruth, nevertheless insists on following Naomi back to Israel.  Even in Naomi’s sad state, Ruth has glimpsed enough to take Naomi’s God, the God of Israel, as her own.  Like Rahab, she decides to trust her security to God and His people.

Once back in the land of promise, the only survival option for penniless widows  was to follow the harvesters in the fields and gather whatever grain the workers left behind.  This doesn’t sound very promising, but God had commanded the people of Israel not to harvest every bit of the grain, but purposely to leave the corners of the fields for the poor.  Since Naomi is too old for such hard labor, Ruth proves her mettle by going out herself to work wherever she finds opportunity.

As God would have it, she finds opportunity in the fields of Boaz, who apparently is Rahab’s son and also just happens to be a close relative of Naomi . . . eligible to marry Ruth and raise up children to carry on Elimelech’s family name.  Through Ruth’s work in Boaz’s fields, they meet and observe each other’s good character.  Eventually the family connection is discovered, Boaz marries Ruth, and they have a son together who becomes the grandfather of King David and one of the ancestors of Christ.

No matter how shattered her dreams, no matter how hopeless her prospects, Ruth “seeks protection under God’s wings” and obeys Him by working hard within the options available to her.    God then opens further doors for her into a future far beyond her first broken dreams.

Have you ever been where Ruth was, or are you there now?  Are your dreams for the future scattered on the floor in a million pieces?  This is not the end of your story, beloved.  God wants to replace those broken dreams with new and better ones.  He is able to make you whole if you give Him all the pieces.  Trust Him like Ruth did and obey Him with whatever duty lies before you today.   His promise for you, beloved, is Jeremiah 29:11:

“For I know the plans I have for you," declares the LORD,
"plans to prosper you and not to harm you,
plans to give you hope and a future.”

And since it's Monday, thanks be to God for (endless gift list #2777-2790)
~His grace to broken people (like me)
~a week without doctor's appointments
~setting out the nativity scene my grandparents gave us when we married
~white twinkle lights in green branches
~quiet evening working a puzzle together
~driving myself for coffee
~wrapping gifts for people I love
~mailing calendars to our sponsored children
~Christmas photo from the family I babysat more than a decade ago (??!!)
~Christmas piano books down from the attic
~listening to A Christmas Carol, excellently read
~the possibility of real, lasting change for good
~candles on the table
~contented dog snoring on the sofa on a chilly morning
~this remarkable tribute to my father-in-law, or rather to the way God used him on the mission field and in the pastorate