The Life of God in the Soul of Man {Book Review}

To them God chose to make known how great among the Gentiles are the riches of the glory of this mystery, which is Christ in you, the hope of glory" ( Colossians 1:27, ESV).

The Life of God in the Soul of Man, by Henry Scougal, is quite possibly the best little book you've never heard of about the Christian life. At least, I had never heard of it until Nancy DeMoss Wolgemuth shared the quote in the graphic above. That quote and the title (a sermon in itself) intrigued me enough that I leapt at the chance to review Crossway's new edition. Scougal originally wrote this volume as a letter to a friend; as a pastor and professor, he felt a written introduction to Christian living was the best way he could love his friend.

Henry Scougal (1650-1678) died at age 28 of tuberculosis, but his life and writings bore fruit for the kingdom of God beyond the number of his years. Knowledgeable in Latin, Hebrew, Greek, and a few related languages of the Ancient Near East, the Scottish Puritan first pastored a church briefly and then accepted a position as professor at King's College, Aberdeen. Given the brevity of his life, he did not leave many publications, and this is the best known of his works. The famous evangelist of the first Great Awakening, George Whitefield, claimed he never understood true religion until reading this book. According to the foreword of this Crossway edition, J. I. Packer attributed the theological foundation of the English side of that glorious revival to Scougal's little book.
For literary context, his dates overlap with fellow Scot Samuel Rutherford, John Bunyan, and John Milton. For historical context, the Authorized Version of the English Bible was published in 1611; we know it by the Scottish king of England who authorized it, King James I. Scougal was born near the end of the Commonwealth period, when Oliver Cromwell and the Puritans governed Britain. Early in his life, the monarchy was restored. The "Great Fire of London" occurred in 1661.

True religion is quite another thing. Those who are acquainted with it will entertain far different thoughts about it and avoid all false imitations of it. They know by experience that true religion is a union of the soul with God. It is a participation in the divine nature. It is the very image of God drawn upon the soul. In the apostle’s words, it is Christ formed within us. In short, I do not know how the nature of religion can be more fully expressed than by calling it a divine life (Kindle location 137-154). 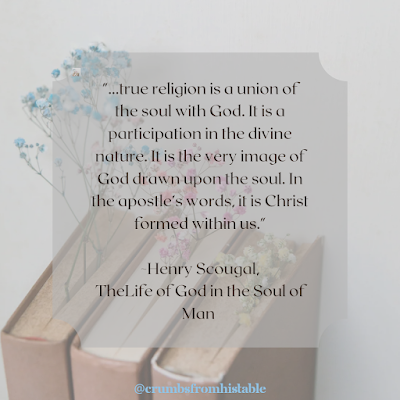 Again a little farther on, he writes, "Religion is a reflection of the divine perfections, the image of the Almighty shining in the soul of man. It is a real participation of his nature. It is a beam of the eternal light, a drop of that infinite ocean of goodness. And those who are endowed with it can be said to have God dwelling in their souls and Christ formed within them" (188). 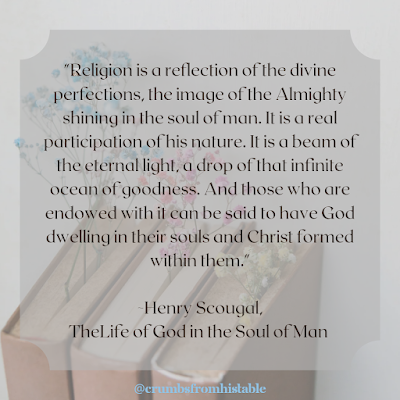 This life, as he describes it (and I believe his thoughts conform to the Scriptures), is a life of mutual love between God and the Christian and between the Christian and his brother or neighbor; of holiness, since the holy Christ formed in us through the Holy Spirit makes us like the holy God; of humility, as we see our lives in the light of God's perfect holiness; of prayer. 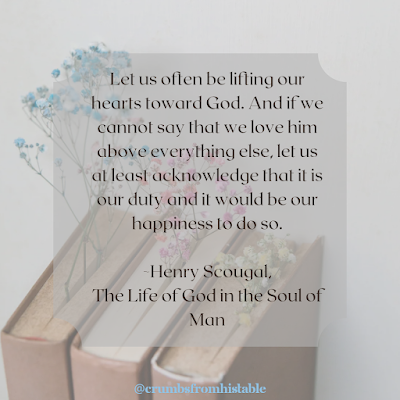 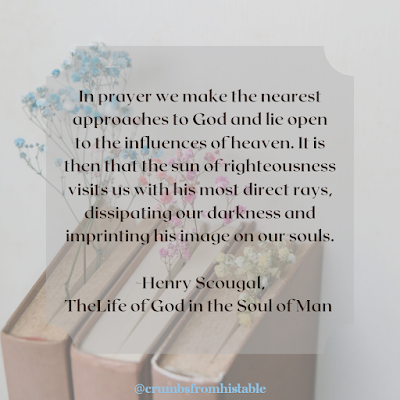 This wee book concentrates so much treasure into so few pages as to leave me gobsmacked. It would take me volumes to unpack as much truth. It inspires me, challenges me, humbles me, woos me to love God more, and overwhelms me with His love for me. It holds many ideas in common with Jonathan Edwards's much longer work The Religious Affections, but here they are expressed more concisely and poetically. Also, Scougal's book is in its very nature a counterargument to those who misconstrue Puritans as dour, joyless fearmongers. Would such a one as that write this almost mystical passage?

Perfect love is a kind of self-dereliction, an emptying out of ourselves. It is a kind of voluntary death wherein the lover dies to themselves and all their own interests, neither thinking nor caring about themselves any more, and being mindful of nothing other than how they may please and gratify the person whom they love. Thus they are quite undone unless they meet with reciprocal affection.… The God-directed lover has an unspeakable advantage, having placed his affection on him whose nature is love. For if God’s goodness is as infinite as his being, and his mercy saved us when we were his enemies, how can God not but choose to embrace us when we have become his friends! It is utterly impossible that he should deny his love to a soul who is wholly devoted to him and desires to serve and please him. He cannot disdain his own image nor the heart in which it is engraved. Love is the only tribute that we can pay him. It is the sacrifice that he cannot despise.… how happy are those who have placed their love on him who can never be absent from them! They only need to open their eyes and they may behold the traces of his presence and glory everywhere. To be able to converse in an instant with him whom their souls love transforms the darkest prison or wildest desert, making them not only bearable but almost delightful (450-466).

The paragraph Nancy Wolgemuth quoted is no less lovely:

Let us consider the love and affection by which holy souls are united with God so that we may see the excellence and happiness that result from it. Love is the powerful and prevailing passion by which all of a person’s inclinations should be determined and on which perfection and happiness depend. The worth and excellency of a soul is to be measured by the object of its love (398).

While my edition came from Crossway and included a helpful foreword, a bit of subtle updating of language, and a Scripture index, free versions are available, given that the original is in the public domain. In my opinion, reading Scougal's small book amply repays the investment of time required, and should you disagree, you won't have lost much.

Scougal lived and wrote in the seventeenth century. The King James Version (as we call it) was the trendy new Bible translation of his day. Bunyan and Milton were his contemporaries. As such, his thesis is densely and compactly reasoned. His sentences and thoughts are longer than the norm today. This is not really a skimmable book, unless perhaps you're an English professor fluent in Restoration literature. If you read it, and I hope you do, anticipate a slower than average reading speed and plan to go back and reread a section from time to time so you can fully appreciate the flow of his argument. Crossway's headings and subheadings help quite a bit with this.
As the foreword of this edition makes clear, Scougal does not lay out the basics of the Christian gospel in this letter. His friend has already come to faith in Christ and believed Jesus the God-Man lived a perfect life, died the death on the cross which we sinners deserve, rose again bodily on the third day, and now reigns at the right hand of the Father until the appointed time for His return. With the original recipient of this letter having already trusted Christ for salvation, Scougal focuses his encouragement on how to live as a Christian, what theologians call the doctrine of sanctification. That does not in any way indicate a different gospel or alternative way of salvation. 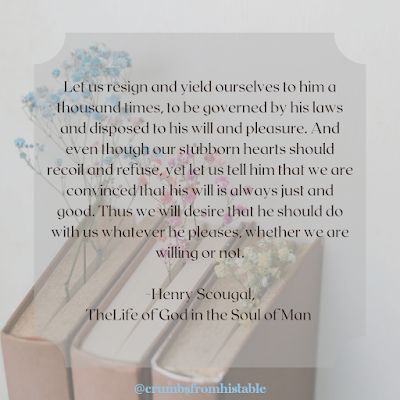 The Life of God in the Soul of Man is a beautiful little book on living the Christian life. Henry Scougal was an old soul indeed to have written such a gem of a treatise in his twenties. It is truly too glorious and beautiful and true to take in fully at one reading. This is a book worth returning to again and again and taking into one's heart. I hope you read it too. If you do, and if this review influenced that decision, please come back and let me know how you got on.
N.B.: Crossway Publishing provided me with a complimentary digital copy of this book in exchange for an honest review. All opinions are my own. Amazon link is an affiliate link.
Another free source of Scougal's book and additional biographical information: https://www.monergism.com/life-god-soul-man
Posted by tinuviel at 1:00 AM