Only goodness and faithful love will pursue me
all the days of my life,
and I will dwell in the house of the Lord
as long as I live. 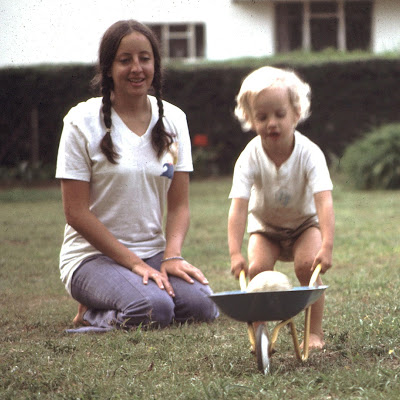 Amore and I had been married 5 years when I first met Cindy. She and her husband, Jim, were serving as missionaries in Papua New Guinea at the time of our wedding and couldn't come. She did, however, write me a long letter soon thereafter on special air mail paper, thin and white, with a red and blue slashed border. The paper folded in on itself to become its own envelope and make the most of every gram of postage weight. She expressed her regret at missing the wedding and her delight at the family's reports of her new sister-in-law. That letter meant a lot to me, and I know it survived the purge of our possessions when we moved to Bangkok. Sadly, I have not yet located it in our new home, though I'm sure it's here somewhere, probably with my bookmark collection.

Nearly 5 years later, Jim and Cindy, with their children, were back in the United States on furlough, and a family reunion was planned where they were living during their leave. I was only a month out from major surgery, but we flew out to meet everyone in the snow-covered beauty of eastern Tennessee in January. I had heard much of this eldest sister and her artistic talent (which was considerable), but this was the first time we met. I was nervous and a bit intimidated.

The pipes froze in the condo where we were staying, along with another of Amore's sisters and her family. None burst, but the lack of running water did make a coffeemaker mishap difficult to clean up and postponed hot showers until the late afternoon sun thawed things out a bit. More inconveniently, it made the sisters' preparations for a surprise birthday tea for me a bit more complicated, as they had to prepare everything at Cindy's house and carry it to where I was staying and the tea was planned. That was my first real taste of the legendary Moore missionary flexibility. They all adapted as though they had planned it this way all along, pulled off a lovely tea party, and carted all the dirty dishes back to Cindy's like they did it every day. 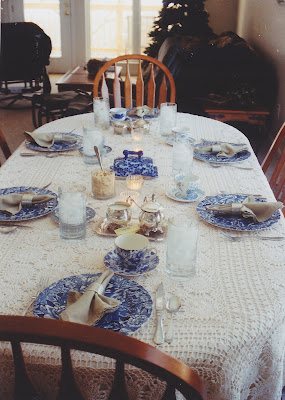 Then Cindy and her family went back overseas, while Amore and I stayed put. For the next 8 years, we only got to see and visit with her a couple of other times, even after her family moved back to the States. 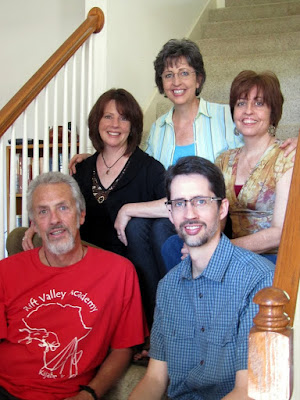 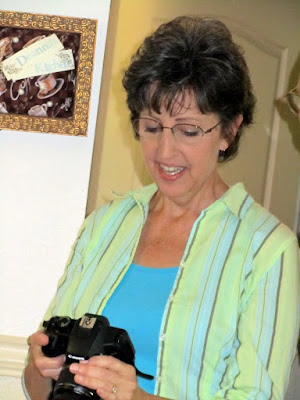 After Cindy and her husband moved to Texas in 2012 to help her parents, we began to see each other more regularly, including 2 more family reunions, and I gradually began to feel less awkward and intimidated and more comfortable with her. Amore and I spent a week visiting the New Braunfels family at the end of 2015, and she and I chatted about yarncraft and family. She graciously looked at our Alaska photos. She could have pointed out any number of flaws in them and told me how they could have been improved, and she would have been right, I'm sure. But she didn't. She encouraged me instead. 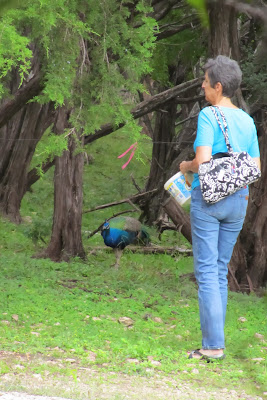 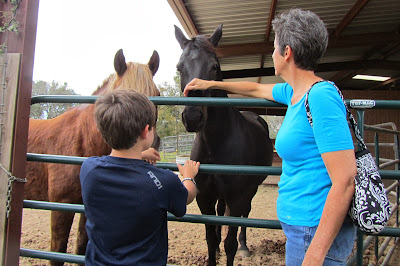 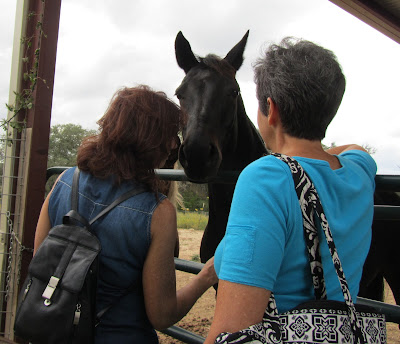 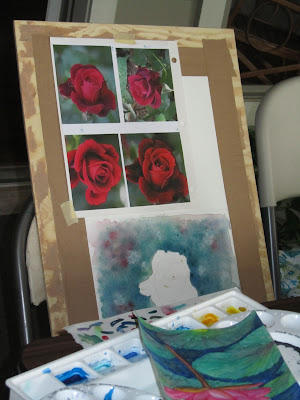 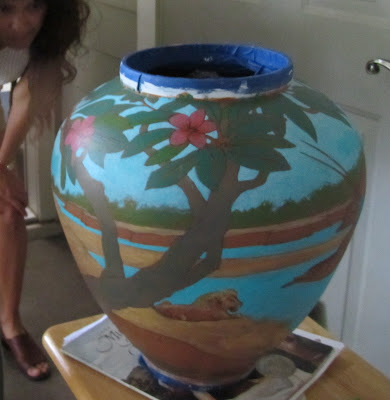 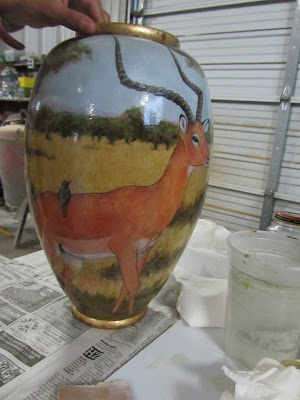 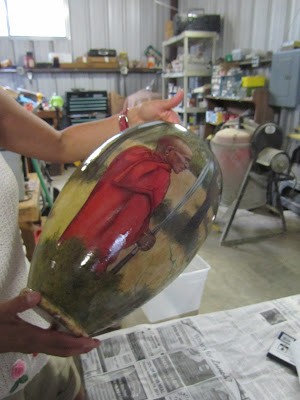 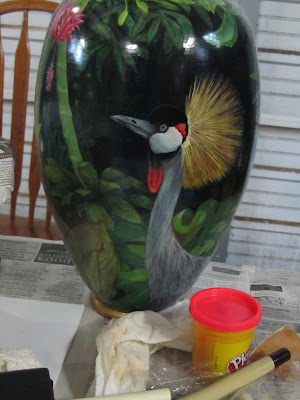 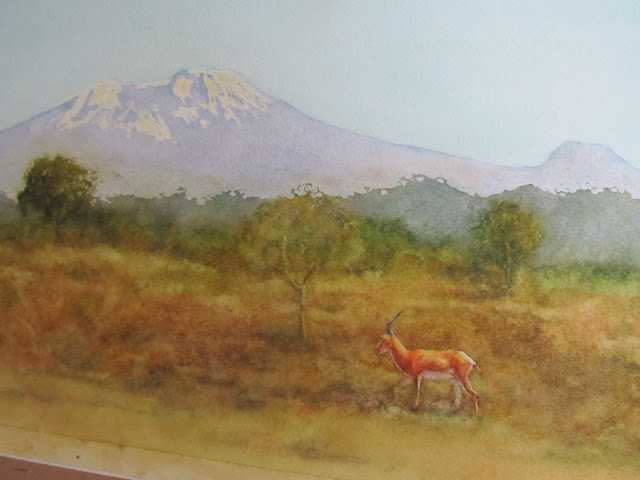 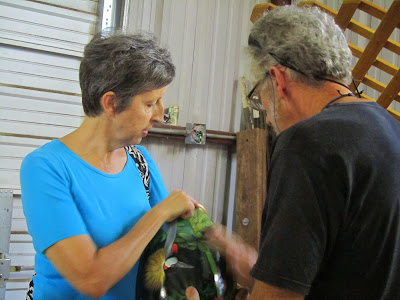 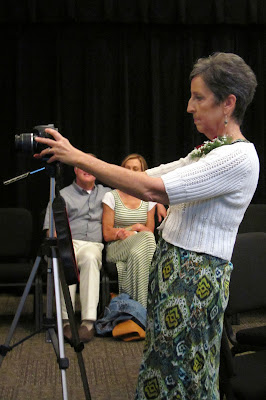 Weeks after that visit, Cindy wrote her siblings with the news that she had been diagnosed with cancer. Surgery was not an option for her sort of cancer, but chemo was. She and Jim were determined this was "not going to rock their world," because God was in control. They hunkered down to fight this.

Fight, Cindy did. She experienced all sorts of strange adverse reactions to the medicines intended to poison the cancer. She had one frightening infection her body couldn't lick for weeks. She and the doctor worked out a treatment plan her body could tolerate and kept going. Then the tumor numbers, which had approached but not reached remission levels, started rising again. Chemo wasn't working. She switched from fighting the cancer with chemo to fighting it with fully naturopathic treatments. When that didn't work either, she traveled to a different oncology center out of state that combined Western and complementary medical approaches.

The chemo seemed to be working again, until it didn't. In July her family made the decision to begin hospice care. Cindy passed away August 20, 2017, with her sister at her side singing a hymn and the same hospice nurse who had cared for her father until his death monitoring her vitals.

The week that began with her death continued with a solar eclipse and a hurricane ten times worse than Katrina. The heavens and earth seemed to echo the feelings of those who loved her.

Cindy and I only really began getting to know each other after her move to New Braunfels. We only really grew to be friends, at least from my perspective, after her cancer diagnosis. I couldn't cook her dinner or clean her house or drive her to medical appointments, but I prayed my heart out for her and encouraged her as much as I knew how. Her need drove me out of my awkward shyness. The series of quotes here from The Shepherd Psalm appeared in her honor and for her encouragement after she told me in January that Psalm 23 was her favorite passage of Scripture.  Even in her illness, she continued to encourage my attempts at photography, though she could do (and had done) much better. I did not receive special treatment in this. She loved to encourage those just beginning to explore the art she loved so much and had taught classes between relocating to New Braunfels and being diagnosed with cancer. 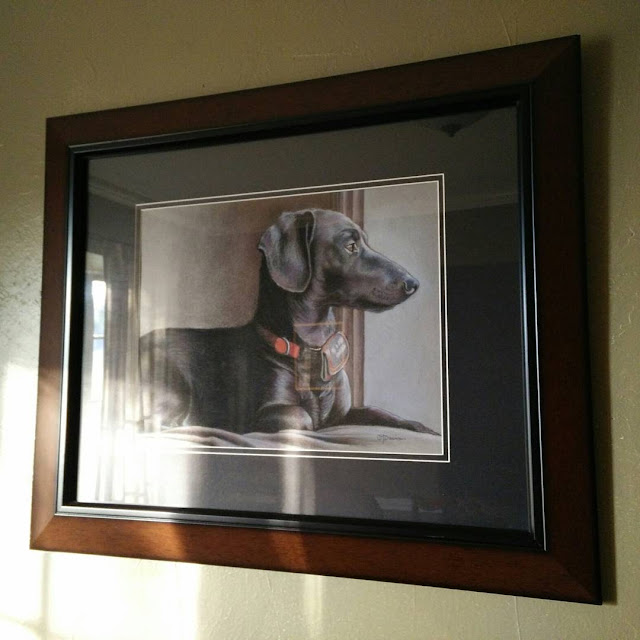 In the final months of her illness, my sister's oldest boy was so impressed by Cindy's pastel drawing of Ebony that he decided to write her a fan letter. Of course, a fan letter to an artist ought to be on the back of a drawing. What did Cindy like? "She's a girl, so she likes beautiful things that girls like... flowers and things like that." What else did she like? I thought for a moment. "Tea. Cindy really likes tea." With one of my teacups as a model, he drew her a teacup of his own design. Then he cut it out and wrote her a note on the back. I mailed it to her, but it came at a really rough week for her, so I wasn't sure she had even felt up to reading it. 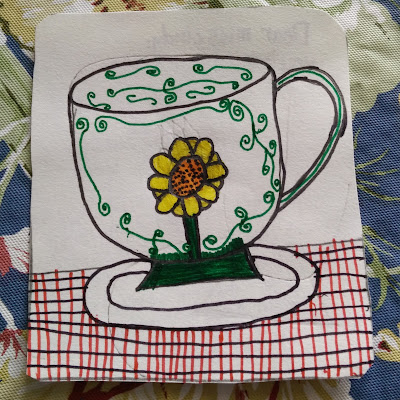 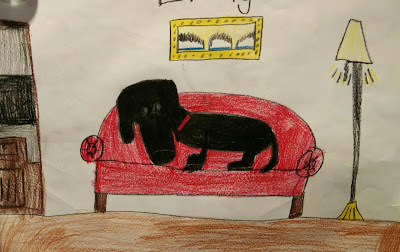 She later acknowledged it in a text message conversation we had during her next chemo trip and said she enjoyed it and wanted to write him back. I sent her a photo of the nephew's own drawing of Ebony, which he made after he saw hers. She sent back applause and a smiley face. She said he was clearly very talented.

She was deeply happy that day, having just received her doctor's thumbs-up to delay her new chemo a couple of days so she and Jim could go visit her adult kids in the Pacific Northwest while she was feeling good. She said she was "besited." That was a new word for me, and she explained that Amore made it up when he was little as a combination of "beside myself" and "excited." He only used it once, but the rest of the siblings apparently adopted it as their own.

As Providence would have it, that was our last conversation. I sent love and messages to her through others in the final weeks, but I was unable to see her in person, and she was unable at that point to talk on the phone. That saddens me, but I'm thankful that she was so happy in our last interaction and so typically encouraging still of budding artists.

As her husband noted in his remarks at the Texas memorial service, I truly thought the Lord would heal her. Even a couple of days before she passed away, I knew that the Lord could raise her up from her sickbed if He wanted, like He did for Dorcas or Peter's mother-in-law. She had so much left to do.

In His love and wisdom, He answered our prayers for healing in the other way, the permanent one. She defeated cancer, not by remission but by walking through it into the presence of Jesus. (She must have been besited indeed in that moment.) She is beyond cancer's grasp now, beyond pain and weakness. Someday we will be able to pick up our friendship where we left off, and both of us will have whole resurrection bodies untouched by sickness and frailty. (Is there hot tea in heaven?)

For now, for those of us left behind, we remember. We grieve. We hope. We pray for her husband and adult children, for her siblings and boarding school friends who became like extended family. We give thanks for whatever amount of time the Lord gave each of us to know and enjoy this beautiful, brave, gifted woman who added so much beauty to her world.

In addition to Cindy's missionary service in Papua, New Guinea, she and Jim also worked in Zambia. They both grew up on the mission field in Africa and met at Rift Valley Academy. They celebrated 32 years of marriage in 2016. Cindy left behind three adult children, four siblings and their spouses, her mother, numerous nieces and nephews, and many, many friends around the world.

Father of mercies, comfort our afflictions.


Here are a few more glimpses of some of her artwork, as it was displayed after her memorial service (with apologies for the reflections): 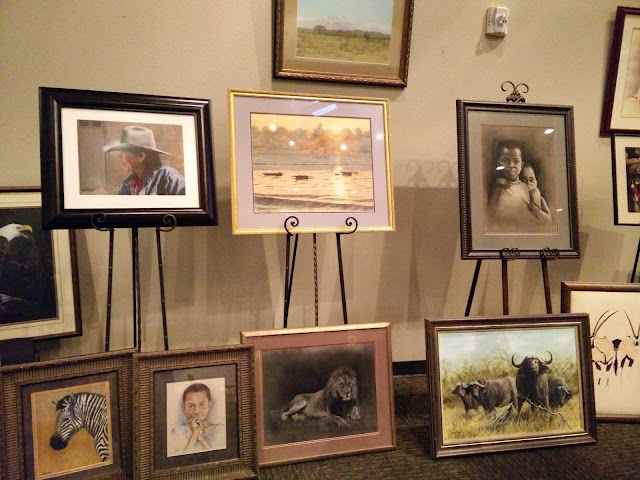 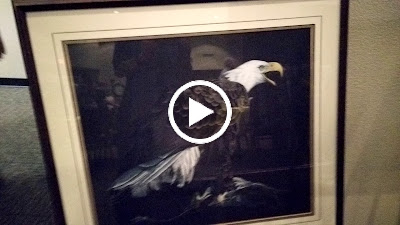 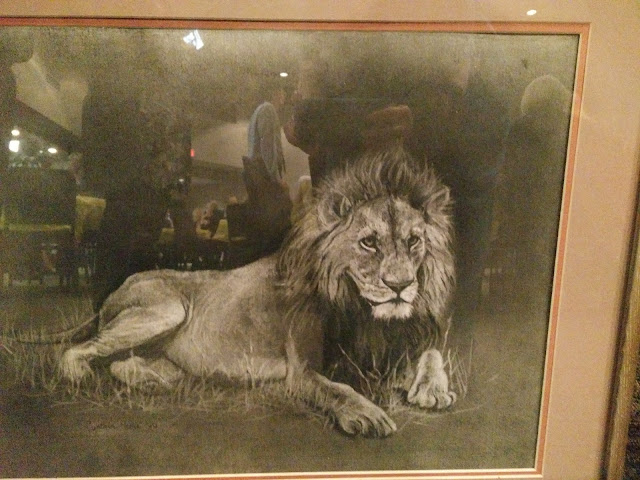 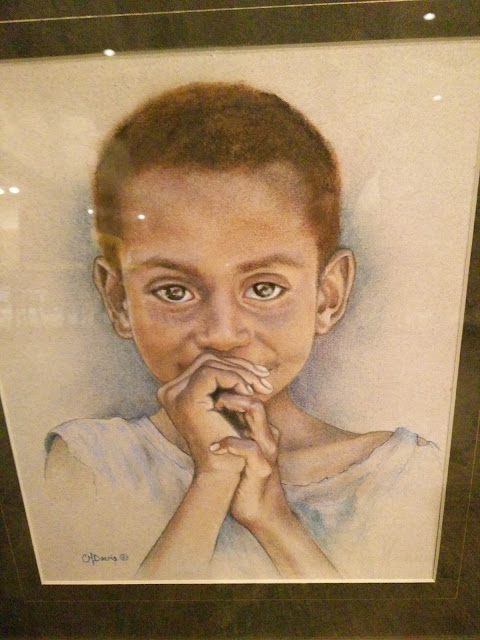 ***********************
You may also like:
Through a Shadowed Valley (the first post here about Cindy's illness)
The Gift Nobody Wants, a poem about trials
Kingdom Suffering, about some of the Lord's good purposes in hard things
and the thoughts my husband (Cindy's younger brother) shared at her memorial service