In May, my church's children's minister agency director Special Agent T tried to recruit me to assist in a Bible story room at Vacation Bible School to train junior agents for Agency D3 in the evidence vault. I declined, since I was scheduled for shoulder surgery in the very near future and would just be beginning a long, painful rehab at the time of the mission.

Two weeks pass. My shoulder surgery proved much less extensive than the MRI had indicated. Consequently, I would have six weeks of physical therapy under my belt before D3 needed me.

Sp. Agent T tried again, sweetening the deal by inviting me to assist my dad the renowned Sp. Agent Tony in his evidence vault teaching Bible stories to 3rd and 4th graders. I said I'd pray about it and see how the first couple of weeks of rehab went and get back to her. (Amore's loving, supportive comment: "Wow, they must be really hard up for volunteers for her to be coming after you." Ahem. Thanks, honey.)

We prayed and looked at the calendar and realized that, if my therapist let me have that week off, D3 week in mid-July would be the first week since Easter with no medical appointments. So. That checked out. My therapist would indeed let me have that week off from appointments as long as I did my homework exercises. By that time I was getting excited about pretending to be a spy with my dad  teaching children the Bible for a week after a long time in retirement, both from teaching and from ministry.

(For those unfamiliar with Agency D3, it was one of Lifeway's 2014 Vacation Bible School curricula, and it was oriented around a spy theme.)

I accepted. I met with my handler to get the mission specs and my assignments. I wrote a tune to help us learn the D3 memory verse. I prattled on about the plans to my PT intern (more about her in an upcoming post).

And then, about a week before the op started, I panicked. Five half-days in a row away from home, active, engaged with people? Why, I haven't done that since... I don't even know how long. At least five years. And I haven't stood in front of a classroom since 1998, and that was high school. What was I thinking? And why didn't my husband talk me down off the crazy ledge?

"Deep breaths, soul. The Lord got you into this. It's up to Him to get you through it. His power is made perfect in weakness, remember? And besides, it's too late to back out now. Your dad has your back. If things go sideways he'll take care of you. You're focusing on the wrong things. Look at the Lord, not the waves."

I prepared for my training exercises, practiced the memory verse until I woke up in the night with it stuck in my heard, and gathered my share of the materials. Then I put on my Agency D3 t-shirt uniform and reported for duty.

And do you know what? It's been a long, long time since I've enjoyed myself so thoroughly and felt such a fit between my job and myself.

Our Person of Interest for the week was Jesus of Nazareth. Our mission objective, to investigate what the evidence file (the Bible) says about who He is. Much has been said of Him, much written. We were out to discover, decide, and defend the truth. 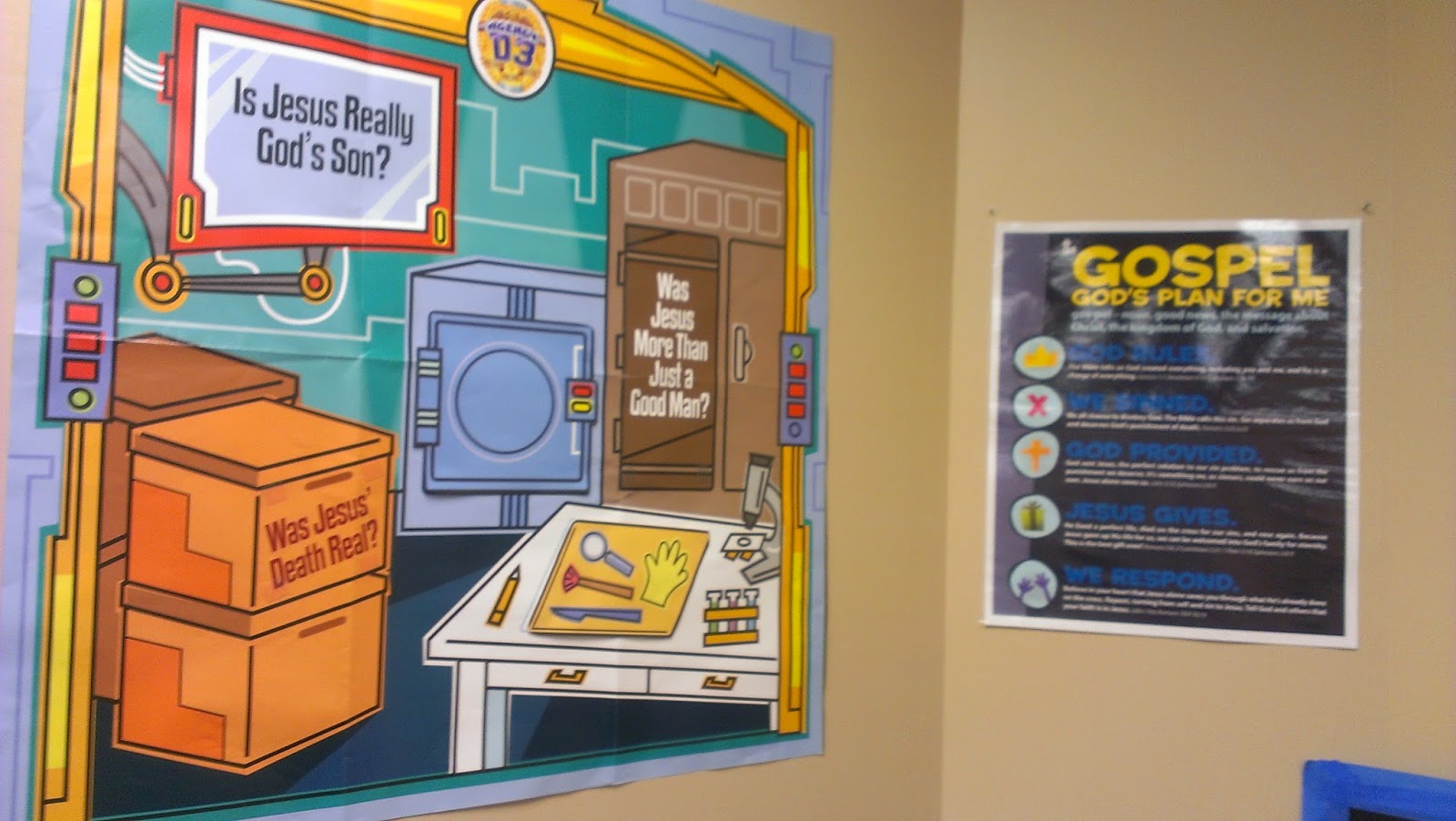 Each day our assignment was to ask and answer a specific question about this Jesus: 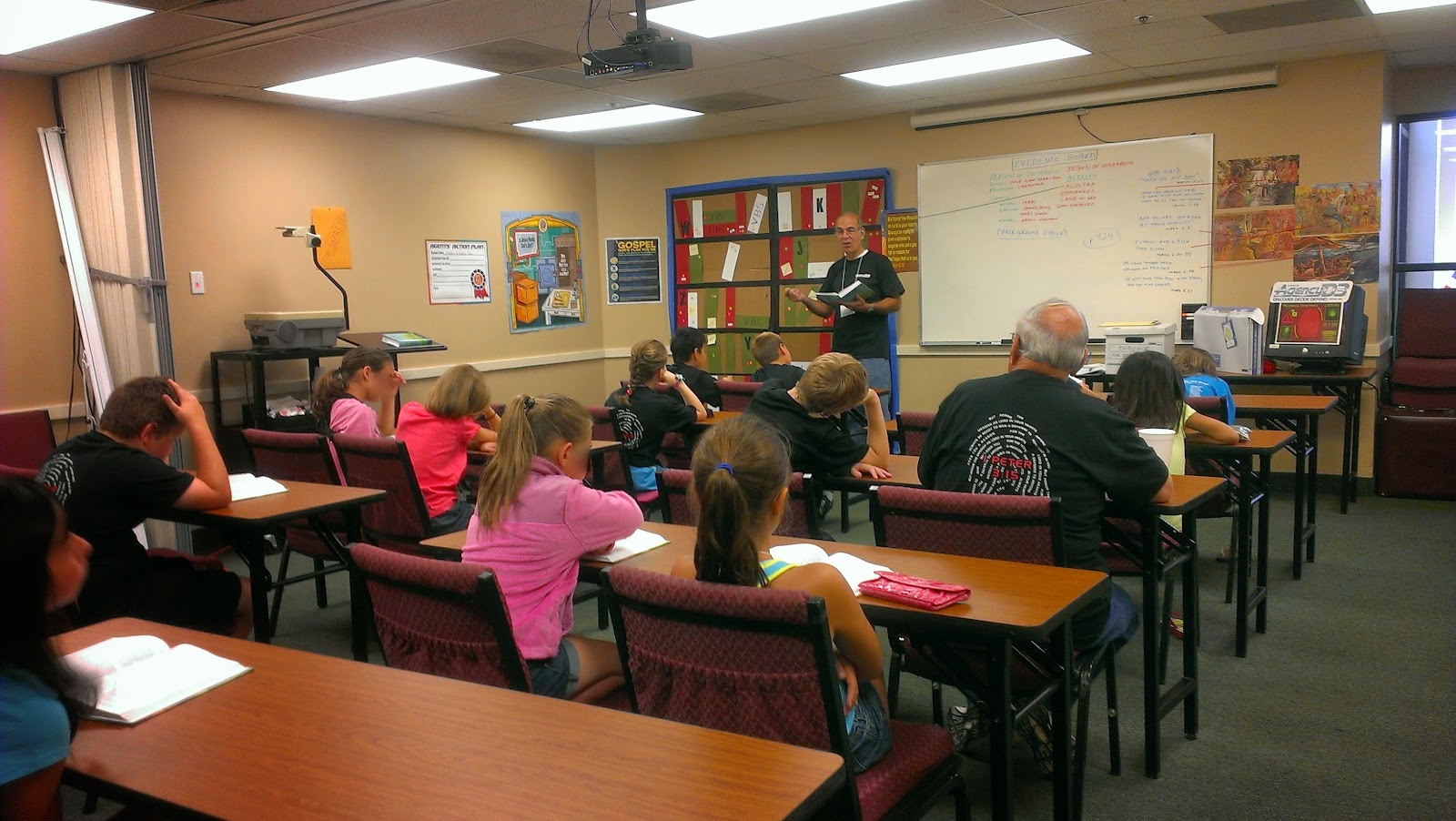 For the most part, Dad the lead agent led the new recruits through the Bible story evidence file. I conducted fun training exercises, e.g., a story review disguised as a hunt for a mole within the agency and a primer on anti-counterfeit features of the $20 bill (a warm-up for the discussion of whether Jesus' death was counterfeit, if you're not seeing the connection). Sp. Agent Tony had some fun, too, bringing an actual frozen sardine for the telling of the feeding of the multitude on day 2.

In addition to the substantial, well-designed, enjoyable lesson content, all of us enjoyed the dress-up days: dress-like-a-spy day on Wednesday and disguise day on Thursday. Here are my attempts:

Besides the disguises (wink), my favorite day was Thursday, when I got to lead the junior agents in examining the evidence for Christ's resurrection. The mission specs prescribed having four zip-top storage evidence bags in the evidence box:
Paragraph by paragraph, we read through Luke 24, Agent Tony taking out each evidence bag as we reached the relevant part of the account. This is probably my favorite way I've ever shared the evidence for the Resurrection, and I hope to remember those four bags and their contents as pegs to organize my own memory of the different proofs Jesus provided to those who followed Him. (Telling the story five times in a day, plus practice in advance, might help too.)

On the final day, each student had an opportunity to complete his or her own "Agent's Action Plan," a summary of the conclusions from each day's assignment and the agent's own decision based on those conclusions, whether to believe Jesus is who the evidence reveals Him to be and trust that He came to save His people from their sins as the evidence says He came to do, or to reject that, or to investigate further. We didn't pressure them as to how they should respond or ask them to share in front of the group at that time, although we encouraged them to tell their group's teacher and parents their decision.

During that response time, one boy raised his hand for help. When I went to him and asked how I could help, he said, "I don't need help. I'm done. I need to tell you something."

"My family is going to London on vacation in a few days. Do you know what that means?"

No, I really didn't.

"That means I'm taking this stuff international! I'm going to go tell the people in London what the evidence says about Jesus!"

I told him that was great, that there were lots of people in London (just like everywhere) who needed to hear about Jesus. I hope his parents felt the same.

In another class, we were discussing how we might respond (the "defend" part of the three Ds) to a friend who said, "I don't want to be a Christian. It doesn't sound like much fun." One girl said, "Sometimes it's not very much fun. Sometimes God lets things happen that really hurt, and we can't do things we really want to do, but He always makes something good come out of them." I helped her find Romans 8:28 as some evidence that supported that statement, and we talked about what that meant and how God's idea of good sometimes looks different from ours. Then she asked if she could close the class in prayer and picked up that theme of blessings in disguise in her prayer too. It turns out that she had broken her collarbone and was not allowed to play many of the fun active games her classmates shared, but it seems she was learning from that hard providence.

After the last class on that last day, a very quiet young lady who had been helping that group came up to me and shared her own story. During a brainstorming session with the children about how we might respond to various false statements our friends might make about Jesus and Christianity, I had mentioned my experience with Amore in V--tnam and how more than one of his students there had been imprisoned just for being a Christian pastor. This young lady, "Miriam," shared that her home country of Ir_n is the same way, that it's very dangerous there to be a Christian or minister.

She is a graduate student at a nearby university for a year. She started sharing with the campus IMI worker about her troubles, and he shared Jesus with her. She had come with him to church the week before Agency D3 started. A few volunteers were still needed, and she decided she could do that. She wasn't teaching any spiritual truths to the students, but she was a great help to the teachers in herding them from place to place, distributing supplies and snacks, and other practical tasks. At the same time, she was soaking up the truth about Jesus along with the other children. She said, "Since I've been learning about Jesus, my life just gets better and better, and my problems are fading away." She completed her own Agent's Action Plan to take home and has continued to assist with children's ministry activities and learn about Jesus. We provided her with the International Sunday School information as well, but so far she prefers to learn with the children.

The following day Amore and I went to our youngest nephew Rocky's Minion birthday party across town, and Sunday was VBS Sunday at church. After that, though, I crashed. Amore went to change clothes and returned to the living room to find me weeping. I was exhausted, yes. Relieved, sure. But also sad, which surprised me.

It was such a hard week, so far beyond my strength. And now it was over. And I would miss it. Sure, part of the fun was the spy theme, and how many opportunities does a middle-aged chronically-ill housewife have to pretend to be a spy? But it also felt great to be in front of a classroom again, to be serving the body of Christ by communicating the truth of God's Word, and to be doing so alongside my dad (serving together in ministry for the first time). This isn't something I can do week-on-week as a regular commitment, and that's still hard to accept after all these years, but for that one week, it felt like going home.

Thanks, Special Agent T, for persisting in recruiting me. Thanks, Dad, for taking a risk on me, even though that meant possibly ending up without a helper halfway through the week. You ran a good op. Thanks, Amore, for supporting me and lowering your meal and household expectations even more for a week and a half. Thank You, Lord, for enticing me to leave my comfort zone far behind so You could prove Yourself faithful once again.