The Courage of Joseph 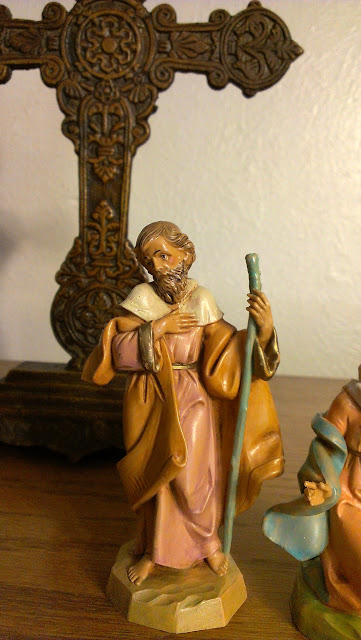 When Joseph woke from sleep, he did as the angel of the Lord commanded him: he took his wife, but knew her not until she had given birth to a son. And he called his name Jesus.
Matt. 1:24-25, ESV

Joseph, husband of Mary, receives little ink in the Gospels compared to his bride, adopted Son, or even Elizabeth and Zechariah. The understated narrative provides just enough detail for us to meet a man of courageous faith and obedience.

He lays down also his right to name his firstborn after himself, instead naming Him according to God's command in his dream. When he receives another divine dream, he packs the family up and leaves his homeland to preserve the Child's life.

What impresses me most about this unassuming man, however, is that he continues to say yes to obedience every day as he raises Jesus as his Son, even though he knows He isn't. Mary says one amazing yes, and the Holy Spirit overshadows her. So far as we know, her pregnancy from there is a normal pregnancy with normal hormones preparing her to love the Child of her womb. Joseph has no such biological support to his "long obedience in the same direction", to borrow Eugene Peterson's phrase.

He is, in other words, a good role model for most of the obedience required of us, as we seek to obey God in the humble duties of life.

*************
We at Wits' End do truly grieve with those in Connecticut in the aftermath of the unfathomable evil done to children and their teachers last week. Even so, God remains worthy of our thanks and praise for His good gifts:

Beautiful examples of faith and courage like Jehoshaphat and Joseph
All the children who were kept safe in their schools and homes last week
Normal b.p. almost every day
Sister's car quest successful and worth the wait
Pleasant conversation with couple across from us at office Christmas party
All Christmas gifts purchased
UPS bringing them to our door
Pescado a la parilla at neighborhood Mexican place
Taking the Lord's supper
Seeing The Hobbit: an unexpected journey (2 thumbs up)
Last currently scheduled medical appointment of year Monday for me
Ebony back to 100% after GI infection
Good test results for friend
Surviving without caffeine
The light of Christ bright enough for grave darkness like that in Newtown Friday
Grace big enough to redeem that terrible grief
A weeping Savior
(Gratitude journal, #8376-8392)

Sharing with MondayMultitudes and Playdates with God