Last Thursday morning after Allen and Ebony left to walk in the park, I sat by the sliding glass door and watched the sun rise "a ribbon at at time." As I drank in God's beautiful sky painting, a song arose in my heart:

Jesus is fairer, Jesus is purer
Than all the angels heav'n can boast.

Then it occurred to me that no one was around to be bothered by my singing, so why not shift the song from heart to mouth?

Three verses of "Fairest Lord Jesus" followed, but what was the fourth? My mind wasn't returning the search result quickly for my digitally trained impatience, so I pulled the nearest hymnal off the nearest bookcase, scanned the index of first lines, and turned to number 211. As it happens, that hymnal only includes three verses for that hymn.


What next? Another brief search brought me to "In the Garden," a favorite introduced to me by my maternal grandmother, whose hymnal this was. The hymnal opened easily to that page; this was one of her favorites, too, for the binding to be so creased in that spot. 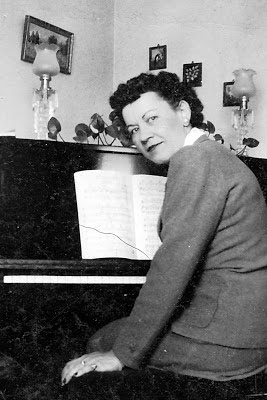 After that discovery, I flipped through the pages from one natural opening to another: "Tis So Sweet to Trust in Jesus," "At the Cross," "I Would Be True," and more. As the pages turned, I could hear my grandmother's voice in my mind's ear, just as though she were singing with me. Most of my memories of music at her house involve one of us granddaughters at her piano, although we all knew she had played. Apparently, far back in the treasuries of memory, she sang hymns with me too, unless the brain's mysterious alchemy created false memories out of scraps of true ones pieced together. 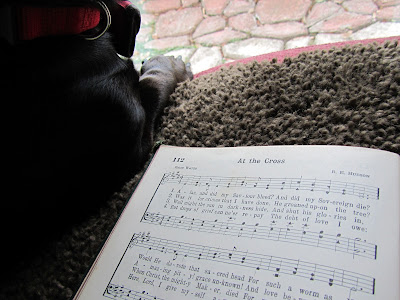 I had certainly known she sang and played hymns, whether with me or alone, some of them often. Discovering her well-creased favorites was like a glimpse into the journal of this beloved woman who passed away 21 years ago. As I perused and sang some more, a realization dawned on me: I was holding my inheritance in my hands.

My mother's parents were not wealthy people, as the world measures wealth. Their homes in all my memories comprised rented apartments, and for the last decade or so of her life, my grandmother--whom her eldest granddaughter allegedly named Giggy--didn't even own a car. What she had, however, she gave: time and love in abundance, basic sewing and crochet skills, an affection for hymns, and an example of sacrificial love in marriage. 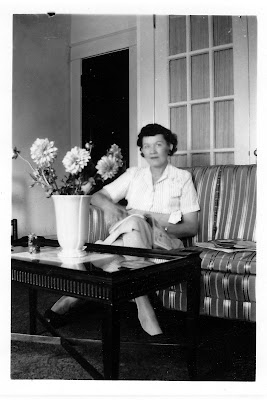 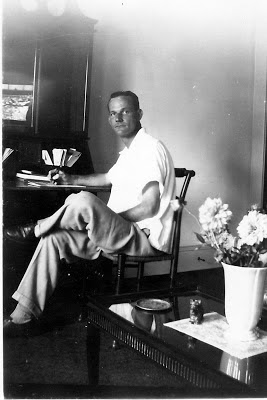 My grandfather was her second husband. She had been widowed as a young mother during the Depresison and did not remarry until her son was nearly grown. My grandfather was a decade younger than Giggy, so she always expected he would survive her and care for her in her dotage. When I was still in primary school, he developed dementia diagnosed as Alzheimer's. Most of my memories of him were situated in nursing homes, after it had become unsafe for him to remain at home with her.

My mother drove her to visit him at least three times a week, and in school holidays we would accompany them. Every time we went, my grandmother would bring him his favorite dessert, Millionaire Pie, which she made without crust to protect him from choking. Repetition carved enduring memories of that yellow and white frozen dessert beginning to melt in its faded, recycled Cool Whip container wrapped first in cellophane then in foil. When he had forgotten how to feed himself, she would pull her chair close and spoon the creamy sweetness into his mouth like a mother feeding a very young child. In my recollection, she never made that pie for any of us but him.

Almost a decade of that sort of marriage was not perhaps what she thought she'd signed up for, but when her generation said, "For better, for worse" and "till death us do part," they meant it. I never heard her complain and seldom saw tears, even though there must have been plenty shed in private, perhaps even spilling onto the piano keys while she played from this hymnal.

As I sang that morning, all these memories came flooding back, and I shed a few tears myself. As to what I'm holding today, when I'm holding a hymnal in my hand or those old hymns tunes in my heart; 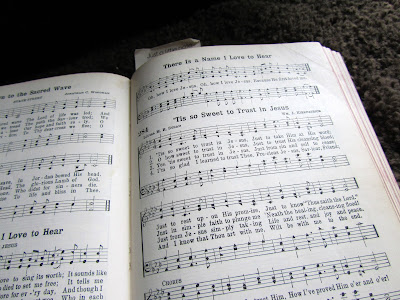 when I pick up hook and yarn to make something warm or lovely; 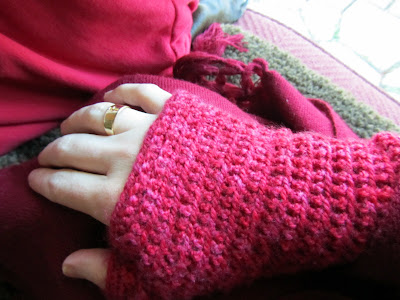 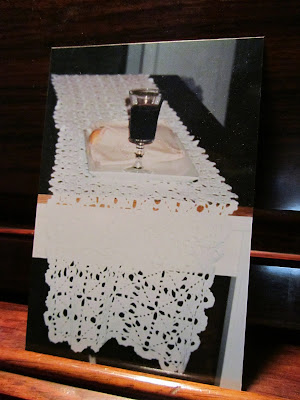 when I sit at her sewing table, where she taught me to sew doll clothes and where now I write; 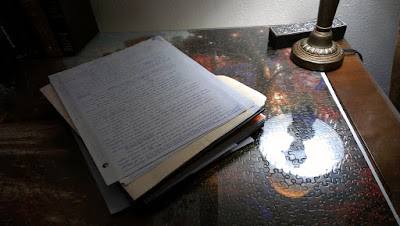 and when I hold her memory in my heart-- in all these things, I'm holding my inheritance.

************************************************
What else I'm holding in head, heart, hands, and home:
:: so many memories. . . whether from something in the autumn air or ghosts of Thanksgivings past
:: more homemade cranberry sauce, Giggy's recipe plus my own spices and Splenda instead of sugar
:: leftovers from my mom's meal yesterday
:: a completed hat crocheted
:: no stitches in my scalp
:: husband home for Black Friday
:: gladness his new employer grants Thursday and Friday for Thanksgiving
:: Christmas list taking shape

What are you holding today? Feel free to share in the comments here or at Amy's, or write your own post and tell her so.

sharing today with Amy's "What I'm Holding" series and Monday with Play Dates with God at The Wellspring.
Posted by tinuviel at 7:00 AM

Email ThisBlogThis!Share to TwitterShare to FacebookShare to Pinterest
Labels: family, what I'm holding