...God, who has saved us and called us with a holy calling,
not according to our works,
but according to His own purpose and grace
which was granted us in Christ Jesus from all eternity,
but now has been revealed by the appearing of our Savior Christ Jesus,
who abolished death
and brought life and immortality to light through the gospel...
2 Timothy 1:9-10, NASB 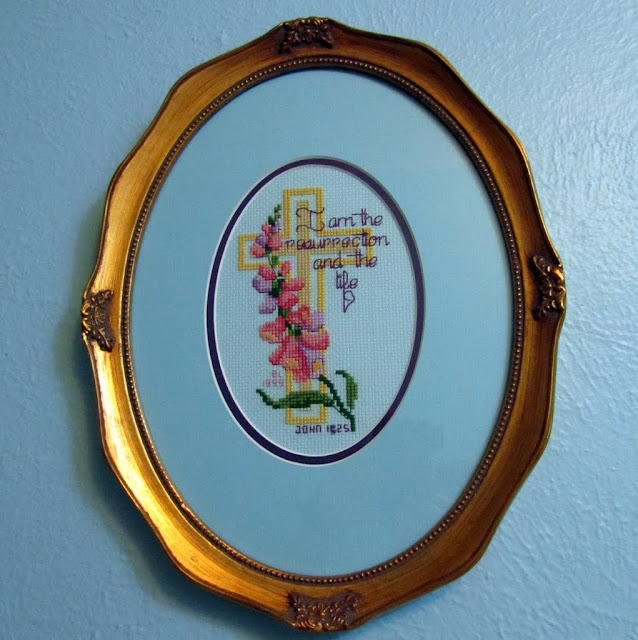 Up from the grave he arose;
with a mighty triumph o'er his foes;
He arose a Victor from the dark domain,
and He lives forever, with his saints to reign.
He arose! He arose! Hallelujah! Christ arose!
Robert Lowry (1826-1899)

That chorus by Robert Lowry, with its trumpet-fanfare melody, supplied the soundtrack in my head Sunday morning. I mentioned it to my beloved on the way to church and commented that I didn't even know where I'd sung it last. Lo and behold, it had been chosen as the closing hymn for our worship service as well.

The resurrection of Christ has given so many gifts that we mortals can never plumb the depths of them or count their number. Even the fifty days from Easter to Pentecost prove insufficient for preachers and poets to enumerate them all.

Christ's victory over death and the grave strikes me especially this year as I consider all the bereavements sustained among family and friends. His death and resurrection disarmed the devil and liberated His children from the fear of death:

Therefore, since the children share in flesh and blood, He Himself likewise also partook of the same, that through death He might render powerless him who had the power of death, that is, the devil, and might free those who through fear of death were subject to slavery all their lives (Hebrews 2:14-15, NASB).

His death and resurrection assuage our grief with the sure hope of reunion someday, reunion not only with our Lord Christ, but also with all we love (even those we have never met in this life but love through their writings or examples), when He gathers His saints to Himself at the last trumpet:


But we do not want you to be uninformed, brethren, about those who are asleep, so that you will not grieve as do the rest who have no hope. 14 For if we believe that Jesus died and rose again, even so God will bring with Him those who have fallen asleep in Jesus. 15For this we say to you by the word of the Lord, that we who are alive and remain until the coming of the Lord, will not precede those who have fallen asleep. 16 For the Lord Himself will descend from heaven with a shout, with the voice of the archangel and with the trumpet of God, and the dead in Christ will rise first. 17 Then we who are alive and remain will be caught up together with them in the clouds to meet the Lord in the air, and so we shall always be with the Lord. 18 Therefore comfort one another with these words (1 Thess. 4:13-17, NASB).

For those suffering in body, Christ's resurrection prefigures our own and so strengthens us with the hope of a new, better body like that of His resurrection, which the Gospels testify could eat and be touched and walk and cook and enter locked rooms. Whatever aches and pains beset my loved ones or me today, they will have an end; one day I will have a body that works perfectly, not bound by the shackles of sin and the fruit of fallenness.

But our citizenship is in heaven, and from it we await a Savior, the Lord Jesus Christ, 21 who will transform our lowly body to be like his glorious body, by the power that enables him even to subject all things to himself (Phil. 3:20-21, ESV).

Most important of all, the resurrection of Christ demonstrates publicly, once for all, that He is who He said He is and did what He said He would do. The empty tomb assures us that the death of the God-Man on the cross was indeed sufficient to cover our sins. Paul told the Corinthian church, who were apparently uncertain whether the dead could be raised at all, "And if Christ has not been raised, your faith is worthless; you are still in your sins" (1 Cor. 15:17, HCSB). Thanks be to God, He has been raised, and forgiveness is available to all who believe in His name.


For I [Paul] passed on to you as most important what I also received:

Because He lives, I continue to give thanks to God for all things:
salvation from sins, past, present, and future::hope of physical and spiritual transformation
::comfort in grief::hymns in my heart::Messiah on the radio Easter afternoon::
unexpected, perfectly timed professional encouragement for my husband
::babies at the park::crossing paths with an old friend::encouraging words in person and in print::
in prayer, sharing the burden of a friend's prolonged, complicated cancer treatment
::answered prayers for no life lost in the 15 tornadoes that swept through our area Tuesday::
finding kind notes from a decade and two ago::worshipping in community on Easter Sunday
::celebrating the Resurrection with family::friends who check up on me::
"Christ is risen; He is risen indeed. Alleluia!"
(gratitude list #5420-5435)