This week we've been talking more than usual about Somo*, Ebony's predecessor as prince of the sofa. Somo joined our family in a flurry of providential circumstances on Memorial Day weekend 2004, and he passed away the day after Memorial Day in 2008.

He's also been on our mind because he was terrified of storms, of which we've had several. If a thunderstorm came when he was home alone with his older brother Steinway, he would shred the carpet down to the linoleum beneath.  We tried gating him in the tiled bathroom, but in the absence of carpet he shredded any paper product within reach.  Consequently, one of us made sure to be home if storms were predicted.

If storms came through when we were home, he would pace and pant and climb up us and the furniture to get to higher ground. When this happened in the middle of the night, one of us would get up with him so the other one could sleep without a small dog standing on his face trying to scale the wall. The maternal bounce-and-walk comfort trick was of no avail.  Finally we discovered that leashing him so he could pace without doing himself harm worked pretty well.  I slept many nights in a sleeping bag on the floor with the leash in my hand and him pacing all around me. 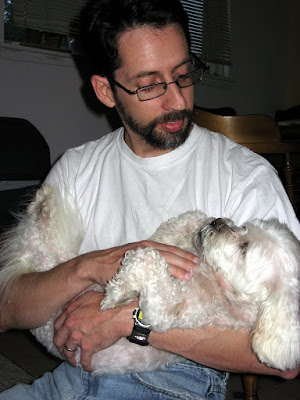 Ordinarily, however, Somo was our rugged individualist. He rarely met a boundary he didn't cross, and he loved, loved, loved to dig, to the point we had to wonder whether some terrier was mixed in with his Lhasa Apso heritage. He dug to bury his wooly bone in the flower bed, and once he dug under the fence to play with the chihuahua next door.  He accomplished the latter feat so quickly that my first inkling was the neighbor knocking at the door holding a muddy dog as far away from herself as possible.

He was a smart dog, too. Once he crawled on his belly through the 6" space under our sofa to steal a bone literally from behind the back of his older brother. Steinway never did figure out where that bone went.
Besides thunderstorms, off-leash dogs were Somo's other nemeses.  We encountered a surprising number of these on our walks. On one occasion we were walking up a street across from the local elementary school.  As we passed one house, the homeowner opened her door to bring in the paper. Suddenly, her mastiff flew past her like a left tackle blitzing the quarterback. Except he was blitzing us. (Have I mentioned Somo was 19 pounds, tops, and I'm just over five feet tall? We were both in the wrong weight class for this fight.)

Never good at reacting quickly or well in a crisis, my only thought was to hold on to the leash because if we ran he'd chase us. And not to make eye contact. And surely the owner would restrain her dog any second. Poor Somo, however, decided he'd take his chances and run. He was smart enough that he probably recognized this particular dog would chase us even if we didn't flee.

So there we are:  me at the center of the merry-go-round, holding onto the leash for dear life with one hand and trying to reach Somo with the other hand; Somo running in circles around me trying to escape but limited to the radius of the leash; and this giant of a dog running in circles behind him and gaining ground. It was like living the folk story about Sambo, only this tiger was not turning into butter.

The situation was desperate when, at the same instant, the mastiff's owner grabbed his collar and Somo escaped his. I stood for a moment, taking in the empty red collar at the end of my leash, and then took off running in the direction Somo had gone.

Back and forth I went down all the streets nearby.  I waved down oncoming cars to ask if they'd seen a small white dog running for his life. When I could not walk any farther, I turned for home and called my husband to say I'd lost his dog but would head back out in the car to keep looking for him. By the time I finished explaining, I noticed a small white bundle on our doorstep.

Somo had already gone home.
Dear Crumbles, if midnight storms have you panicked, may you know in experience the truth that your Master is near to all who call upon Him (Psalm 145:18). When enemies too big to defeat are pursuing you and everything seems to spell disaster, may you find the grace and presence of mind to run home to your Father. He is big enough for whatever you face today. When memories and stories bubble up in your hearts, may you also find kind friends willing to listen or read what you have to share. I'm grateful for you.

*Swahili for confidant or intimate friend

Although I'm a few days late with this, life with my dogs has been a source of many, many "Playdates with God." You may read others' perspectives at Laura's place, The Wellspring.