Caterpillar Sanctuary: A Sacrament of Hope

In defiance of the death, disease, dissension, and disaster
On every screaming front-page headline,
In the name of Christ, the Risen Conqueror of death,
In the living resurrection hope to which we have been born again,
For the glory of God,
As stewards of His creation—

I have bugs on my kitchen counter.
No ordinary or random bugs though:
Only caterpillars may enter without their lives as forfeit. 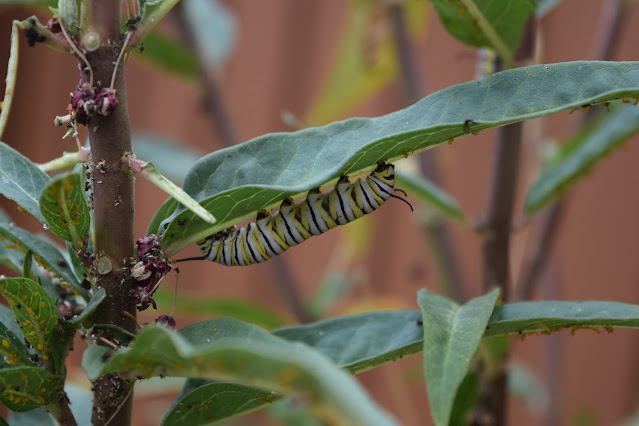 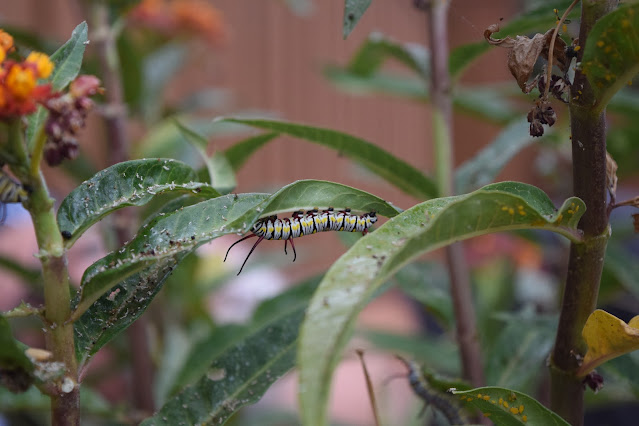 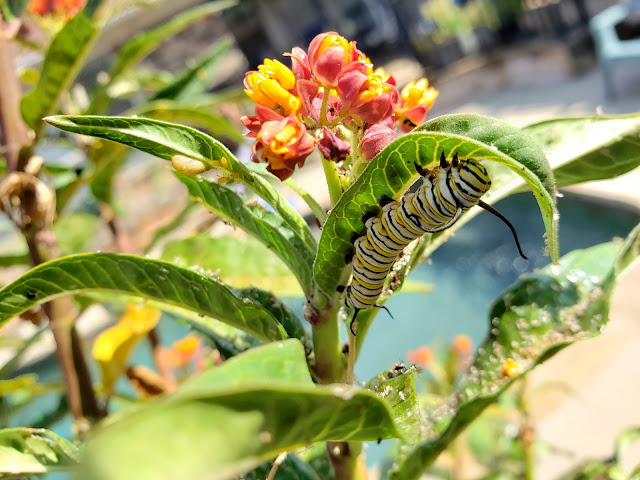 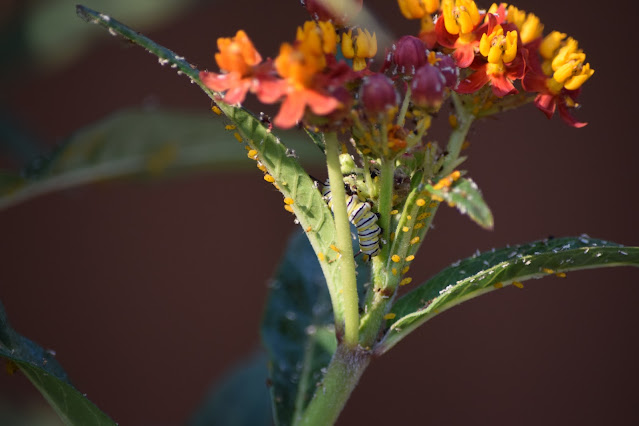 A fortnight past,
This year’s crop of milkweed
Crawled with an admirable array of caterpillars,
Queens and monarchs, to be exact.
Every time we ventured to the back garden,
We played our own ever-changing custom game
Of “Where’s Waldo?” in the plants.
Yellow, black, and white caterpillars,
The queens with red antenna tips,
Concealed themselves remarkably well
Amid green leaves
And gold and saffron blossoms.
As July burned to embers
And August caught fire,
We counted thirty butterflies-in-waiting,
And what a joyful waiting!
In a single day,
Nineteen disappeared.
Our next visit to the plant revealed the cause:
A wasp caught in the very act
Of killing, dismembering, and devouring one.
Amore executed the murderous creature.
The next morning
We only counted six.
Another wasp of yellow and black
Was feasting on more butterflies.
Helpless we may be to stop the headlines racing past,
But we could help these caterpillars,
And we did:
We reassembled our butterfly habitats
From five years past,
Filled them with milkweed stems,
And placed the three monarchs in one,
The three queens in another. 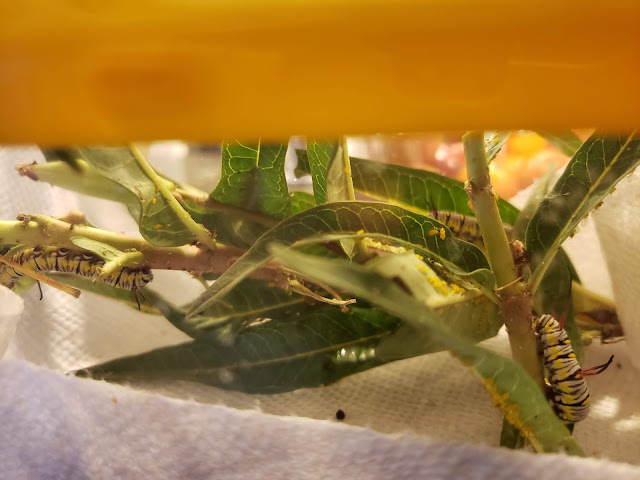 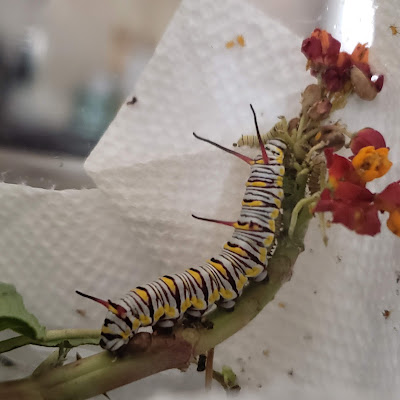 Except the passing days revealed not three queens,
But four,
The fourth too small to see
Until it grew. 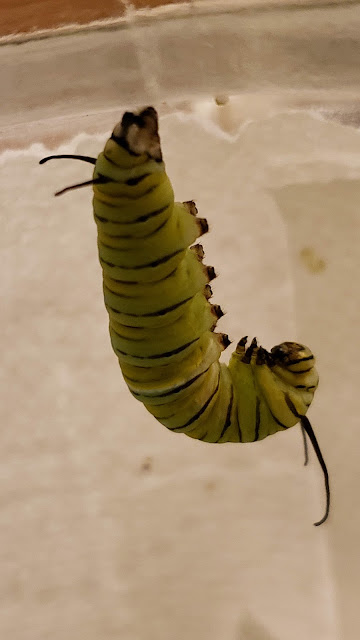 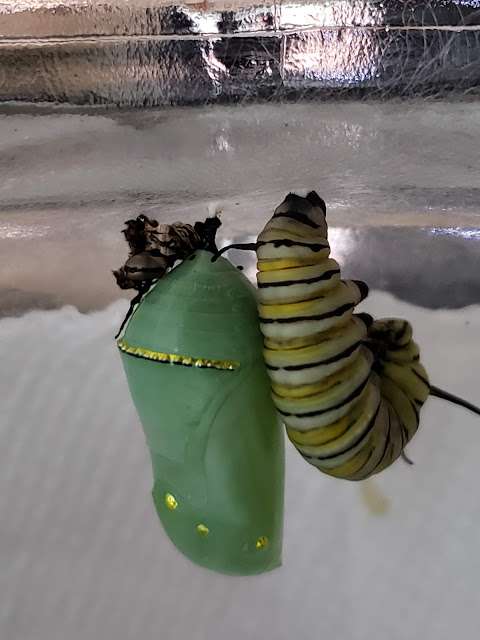 The monarchs shed their caterpillar skin,
And three gold-and-jade chrysalides
Clinging to the jar now,
Awaiting resurrection
Wings.
The four queens have joined them,
In identical but petite versions of their monarch cousins’ caskets,
Clinging in a ladylike row
To the ceiling of their shelter. 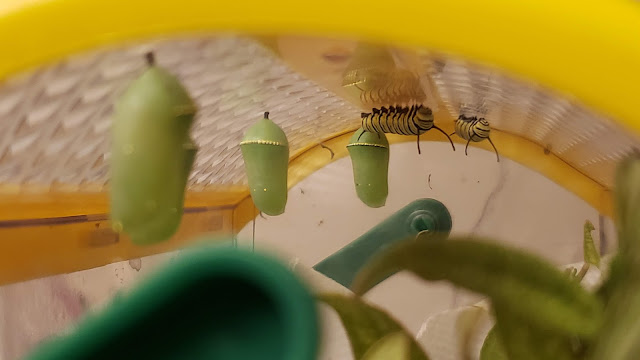 Now we await in hope the translucent transformation
Of the chrysalides, the peek of orange and black
Wings developing within,
The bursting forth of butterflies from the caterpillars’ tombs,
The four remaining monarch caterpillars
Soon to follow suit.
Oh—
Didn’t I mention that?
Four additional eggs stowed away
On the milkweed provisions.
Our own loaves and fishes marvel
(or so it feels),
We rescued half a dozen caterpillars
And now have a dozen, less one
(And counting? Or is that asking too much?).
We wait for so many things, beloved:
For test results,
For school schedules and team rosters,
For financial news,
For home repairs,
For medical appointments,
For hugs, for comfort, for healing,
For the plague years to end,
For our own emergence from cocooning,
For the Lord’s return,
For resurrection bodies.
But today,
In defiance of the death, disease, dissension, and disaster
On every screaming front-page headline,
In the name of Christ, the Risen Conqueror of death,
In the living resurrection hope to which we have been born again,
For the glory of God,
As stewards of His creation—
I have bugs in my kitchen,
A sacrament of hope.