“Older women likewise are to be reverent in behavior, not slanderers or slaves to much wine. They are to teach what is good, and so train the young women to love their husbands and children,  to be self-controlled, pure, working at home, kind, and submissive to their own husbands,  that the word of God may not be reviled” (Titus 2:3-5, ESV).

Last month my mother-in-law, Janelle, met the Lord she loved face to face. She had been fading rapidly and was more than ready to go Home to Him. We were less ready to say farewell, but we rejoice in the hope of seeing her again someday and in the knowledge that she is no longer suffering.  Dear reader, you may meet her someday, so please allow me to introduce you in anticipation of that happy day. (If there are kitchens in Heaven, they would be the first place I’d look for her.)

Janelle Moore was a child of the Great Depression, born between the Greatest Generation and the Baby Boom. She grew up on a New Mexico farm during the Dust Bowl years and reportedly preferred farm work outdoors to cooking, cleaning, and learning with her mother indoors. Those lean years of growing up far from creature comforts like indoor plumbing helped make her who she was and prepare her for God’s calling on her life.

My mother-in-law was a mother of 5, a missionary to the people of East Africa, a Baptist pastor’s wife, and a special-education teaching assistant. She went by Janelle for all the 22 years I knew her, though that was not the first name on her birth certificate. One of the silly things I now wish I’d asked her is why she went by her middle name (and when she changed from her first name, if there had been a change she chose).

Several things I can say for certain without having asked: Mom Moore was hard-working, helping, humble, human, and holy.

Her hard work and diligence seem to have been lifelong. They began in childhood, with her helping on the farm. When she married my father-in-law before her 20th birthday, she quit her own university studies and cleaned houses full-time to keep their little family solvent while her husband completed his bachelor’s degree in preparation for seminary and vocational ministry. She cooked 20 meals a week for most of her adult life, mostly from scratch. (Sunday supper was catch as catch can, everyone fending for himself or herself from available leftovers.) She kept a tidy, organized house, with a place for everything. She sewed the family’s clothes and many home accessories. I have heard that in Africa, she even processed the wild game her husband brought home from safari so that they could freeze it in usable portions. She was the kind of woman who asked, without a trace of irony, for a steam mop for Christmas or a blender for her anniversary. 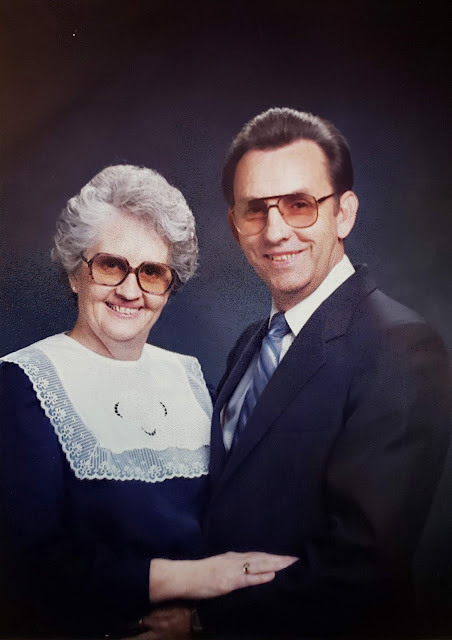 Janelle was also committed to helping others in the name of Christ. As a missionary, she taught East African women the Bible but also practical skills like sewing, hygiene, and childcare. When the time came for the family to return to the US, she helped to plant a church which has continued to grow and thrive. When she needed a job to supplement the family’s income, she helped students with special needs in very practical, hands-on ways. In her retirement years, she logged many hours volunteering at the local crisis pregnancy center, helping scared and confused women choose life and sharing the love of Christ with them in the process. She continued to participate in the life of her church as well, in women’s Bible studies and an after-school program to help struggling readers. In her final years of independence, when she probably longed to be taken care of herself, she poured out her energy in caring for her husband, who suffered from Parkinson’s, and in supporting her oldest daughter in her cancer battle. Even after she moved to assisted living, she led a Bible study while she could and volunteered to help lead activities in the memory care unit where she would later reside.

Mom Moore was not generally the one up front in the spotlight. Her husband of almost 63 years was the preacher and singer, and her youngest son followed the same path for the first half of his life. Her oldest son and daughter pursued the fine arts. Another daughter became a counselor and professor. Another writes beautifully and sings in a women’s chorus. Mom was usually the one serving humbly in the background, in the kitchen, behind the scenes, freeing everyone else to soar. She was not a woman of many words, but she loved with her actions (and occasional straight-to-the-point practical advice). She agreed without hesitation to my husband’s request that she make a kneeler appliquéd with a Hebrew verse from the Song of Songs for our wedding. (And by the way, she only had 3 months to do it.) She agreed without complaint to my request that she make a double-wedding-ring quilt out of my wedding dress. My father-in-law accidentally on purpose let slip after the fact that the pattern I requested was very difficult and caused her no end of worry. But she pulled it off, and we have a lasting treasure in the quilt she made, which has hung on our wall ever since we received it. She thought of others first and put her energies towards the flourishing of her family without seeking credit or applause for herself. 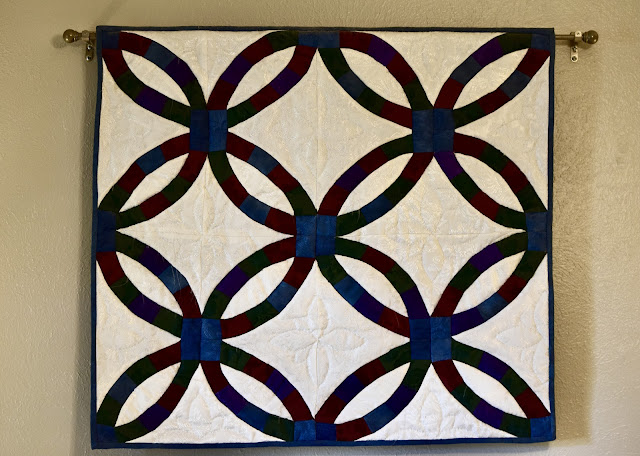 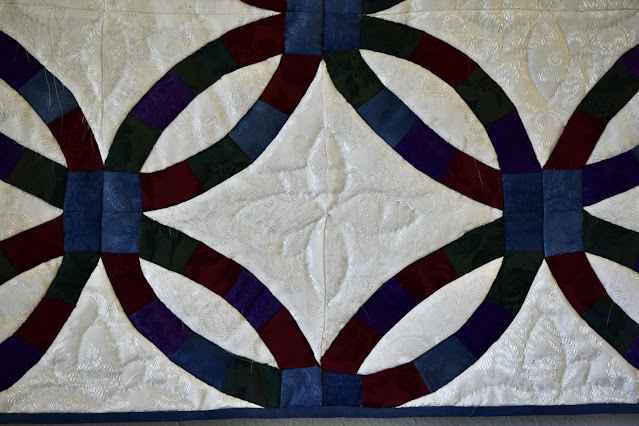 That said, Mom Moore was also human. She loved chocolate and International Foods flavored instant coffee mix. She enjoyed her homemade gluten-free granola for breakfast while watching the birds outside the big kitchen windows. She needed to put her feet up at times with a sigh of fatigue and sometimes exasperation.  She was known to grumble occasionally about the noise or clutter in the house, the amount of time the television had been on, or one too many interruptions. Her knees and back wore out before the rest of her body. She liked playing solitaire, quilting, and researching family history. She enjoyed learning about nutrition and relearned how to cook in healthier ways in her sixties to maximize her quality of life and her husband’s. She delighted to have all her adult children home together and missed them when separated by land, sea, or exigent circumstances. (Yet I didn’t ever hear her complain or use guilt to manipulate them.) When her body and memory failed, she didn’t know what to do with herself without the ability to labor or learn anymore. 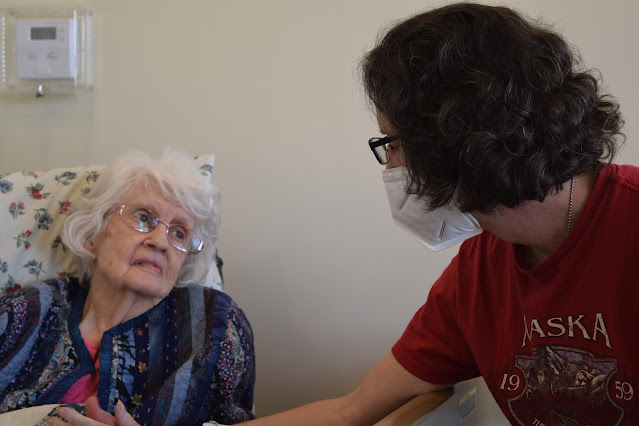 Finally, my mother-in-law was one of the holy women described in Titus 2 and 1 Peter 3:3-5. She was made a saint once for all by grace through faith in the saving work of Christ. Having been thus sanctified through the cross, she continued to grow in experiential sanctification her whole life long, through the indwelling Holy Spirit. Her life of reverence and service adorned the gospel of Christ and did not present cause for outsiders to revile the Word of God or the God of the Word. She was a woman of prayer and practicality. Last week, in reading the story of Tabitha’s death and resurrection in Acts 9:36-41, I thought of Mom Moore. Luke describes Tabitha (or Dorcas) as, “full of good works and acts of charity.” She had clothed the widows of Joppa through the work of her hands, and her death left them weeping. If Mom had lived in first-century Joppa, I think she and Tabitha would have been good friends and labored together with their hands and needles for the gospel of Christ.

In the last several times we saw her, we read Scripture to her to calm her anxiety and sang the old hymns to rejoice her heart. She knew we were known to her but didn’t know exactly how. She repeated statements like, “I don’t know where I am, but that’s ok. God knows where I am.” Now she knows where she is again. Home.  She is living the reality of those Bible passages and hymns, resting from her labors or laboring joyfully with no need of rest. I have no doubt that her Savior and mine welcomed her with a “Well done, good and faithful daughter.”

I wish you could have known her. But perhaps one day, you will. Rest in peace, Mom. We love you and miss you.