12 Things You May Not Know About the Ebony Dog 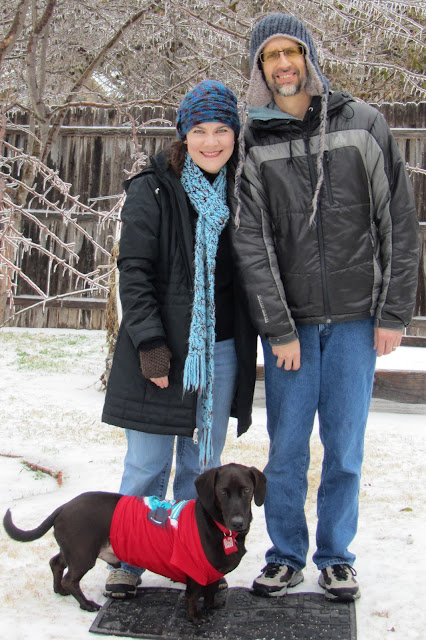 Last week rather pulled the rug out from under us, dear Crumbles. Tuesday morning Ebony experienced a sudden, traumatic health crisis. While he was at the veterinarian for observation and additional testing, I laid my dog, my only dog, whom I loved, on the altar and yielded him to the Father's plan. Wednesday afternoon we learned he had cancer of the spleen with cardiac complications. The heart arrhythmia ruled out surgery, but the prognosis was very poor even if it had not. Although it was one of the hardest things I've ever done, we followed the doctor's advice and said good-bye to him Friday after a couple of days to cherish him and let the other nearby family members see him one more time. He was around 12 years old and had seemed in good health, other than occasional bouts of back pain. Next month would have marked a decade in our family for him.

Even as I grieve the loss of my shadow, I thank God for gracing us with Ebony's life. Ten years feels too short, but I know it's better than I or anyone deserves. That pup loved us with every fiber of his being and brought sunshine everywhere he went.

If you have read here long, you know a good deal about the Ebony Dog already, but here are some tidbits you may not.

12. His experience in our family wasn't always lollipops and roses. He came to us very shy (and that's coming from a shy person), anxious, and afraid of men, Amore included. (This did not become apparent until we got him home.) We undertook a crash course in dealing with anxious dogs, enrolled in obedience school, and worked with him over the course of years to help him be the best and bravest dog he could be. 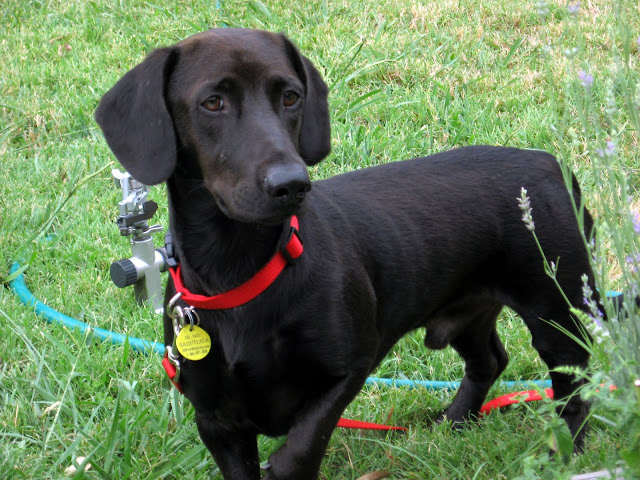 Also, Steinway, our geriatric alpha dog, was pretty chagrined that he didn't have any say in the matter of another dog joining the household. 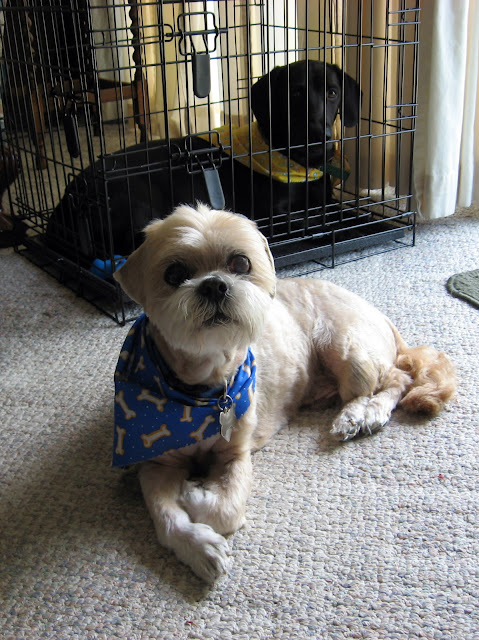 11. Most of the "tricks" (in nephew-speak) he learned were part of the obedience training recommended to help his anxiety. Spin around and roll over were my additions for fun. We all developed a gesture over time for "Where is_______ (your ball, Squirrel Dude, the Kong, etc.)?" "Clean up!" became his cue that we'd dropped a food item on the floor which he was allowed to eat. "Uh-oh!" accidentally became another version of that command, because he wasn't stupid. The final command he had mostly mastered was "Bring it." The last Today puppy gave me that idea as a way to prevent me from having to reach into the far corners of his crate or under furniture to get a lost Kong out. We will definitely keep that on the list for our next dog.

10. He slept in a toddler's t-shirt or sweatshirt every night. Originally that was part of our calming strategy for him, like a Thundershirt, but we continued because he loved his "pajamas" and looked so adorable in them. Sometimes he turned on his Super Gravity Dog powers if he didn't want us to take them off in the morning. 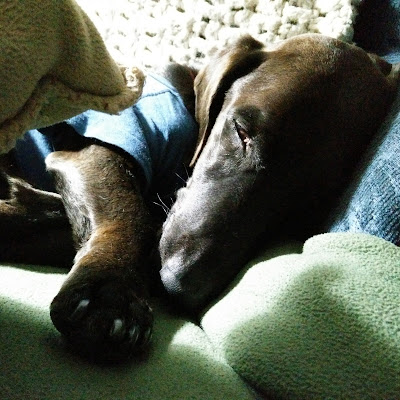 9. He had an enormous bark, which he almost exclusively used when I was with him. His mild-mannered persona usually seen here was his Clark Kent cover identity. In reality he appointed himself my protective detail and gallantly protected me from every slam of a car door and every leaf skittering across the porch. This was most pronounced if it were dark and Amore were absent. The barking stopped once the real man of the house came home and took over protecting me. Amore says our shy Ebony Dog would have taken on a lion if he believed I were in trouble.

8. There's no sense preserving his cover now, so I may as well tell you that he was a secret agent with the Canine Investigative Alliance (CIA), trying to take down the nefarious Dr. Miao (cue evil laugh) and her henchcats. He said the squirrels were her confidential informants, and apparently the bunnies in our new neighborhood were double agents working for her.

7. His code name was Special Agent Hoover. Like the vacuum. His motto? "No noms left behind."

6. Because he would inhale his food without chewing it if we let him, we used food-dispensing toys to slow him down (and entertain us). (See number 7.)

5. His favorite game was hide-the-bone (and more recently, hide-the-Mommy). We would put him in a "stay" in one room and then hide his favorite rawhide bone somewhere else in the house. Then we would go back to him and tell him to "take it." He would take a flying leap across the room and gallop down the hall until he picked up a trail. He got so good at this that we had to leave false scent trails and not go straight to the hiding place. 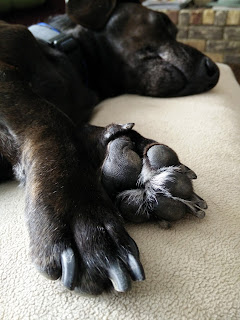 3. He loved pillows and blankets, the more, the better. The exception was if the blankets were protecting a piece of furniture or the pillows were blocking his access to the chair he wanted for his nap. 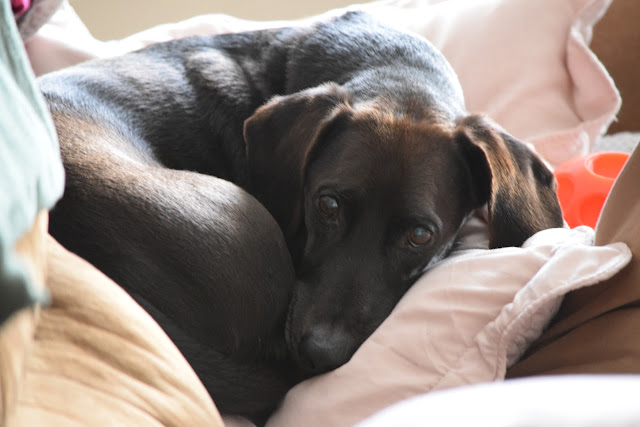 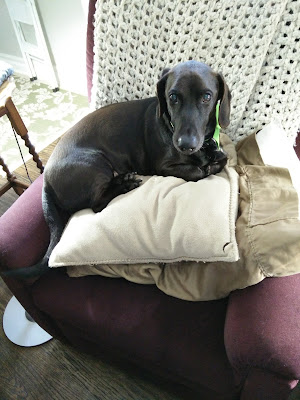 2. Even though he was shy, he loved the people he accepted into his pack devotedly and without reservation. He surprised everyone by adding the three youngest nephews to that number in the last couple of years. He consented to obey their commands as long as they paid him in treats. He never growled or snapped at them, even when they held onto his tail and put their faces close to his, nose to nose (which is generally not advisable with dogs). He knew the words "Grandma and Grandpa," and his favorite place to go in the car was to their house. 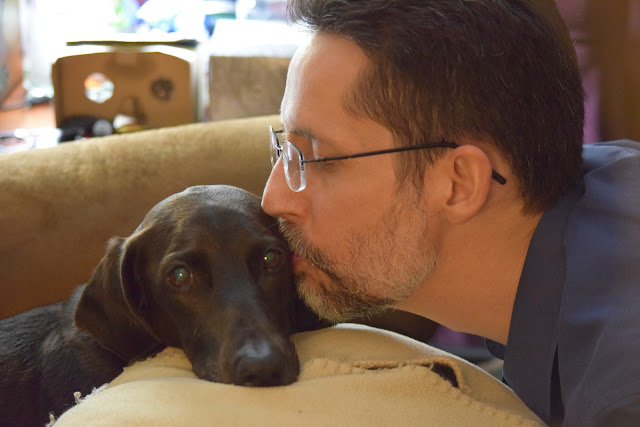 He could not settle down to rest in the evenings or go to bed at night until he'd had his special fuzz therapy time with Amore, and they were daily walking buddies for most of Ebony's life with us. Ebony loved and respected Amore as the alpha dog in our little pack. 1. I was his favorite of all. We both spent more of our waking ours with each other than with any other living thing. He helped me through a long season of being completely or mostly homebound and through several surgeries and many other procedures. He was such a Velcro dog that he didn't even like having a closed door between us, and his tail was a consistently reliable "Mommy Proximity Alert" system. We were both braver together than apart, and it turns out that separation anxiety works both ways. For the last week I've felt like Linus without his blanket.

I don't know whether I will ever see him again in the new heavens and earth. The Scriptures neither promise nor exclude that possibility. C. S. Lewis and John Wesley thought it possible that animals, or at least the companion animals of believers, will be restored in the Resurrection along with the rest of this groaning Creation. I'm grateful to have had him as long as I did, and, really, no amount of time would have been long enough. The letting go would always have required a sacrifice of praise and thanksgiving.

The Lord gives;
the Lord takes away;
blessed be the name of the Lord. 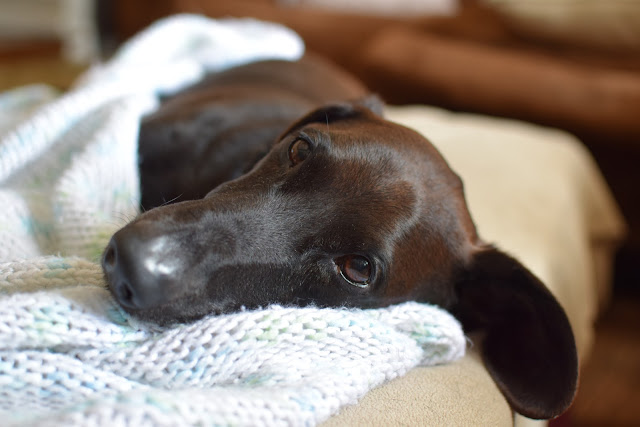