The technical difficulties with the video embedding have been resolved, thanks be to God. If you are having trouble viewing them in your e-mail or RSS reader, please view on the blog here: http://www.crumbsfromhistable.com/2016/11/caterpillar-chronicles.html .

Here at Wits' End, we have bugs in our kitchen. On purpose.

To be more specific, we are providing temporary homes for a cohort of monarch caterpillars. Would you like to meet them?

Since we don't know how to distinguish gender at the caterpillar stage, we chose to name them by the phonetic alphabet: Alpha, Bravo, Charlie, Delta, Echo, and Foxtrot. After the above video was made, we discovered that an egg must have come in on the milkweed leaves, because we had a Golf, too.

If you've been with this blog a few years, you may remember that we hosted a monarch chrysalis during its metamorphosis once before, as I recovered from shoulder surgery. The butterfly's emergence that time happened while we slept, the one disappointment in the experience.

Earlier in the fall, our milkweed held a dozen monarch caterpillars, but none survived to maturity. November is late in the migration season for new caterpillars to appear, but there these were, and we wanted to give them a chance to fulfill their life cycle.

And we wanted a chance to watch. 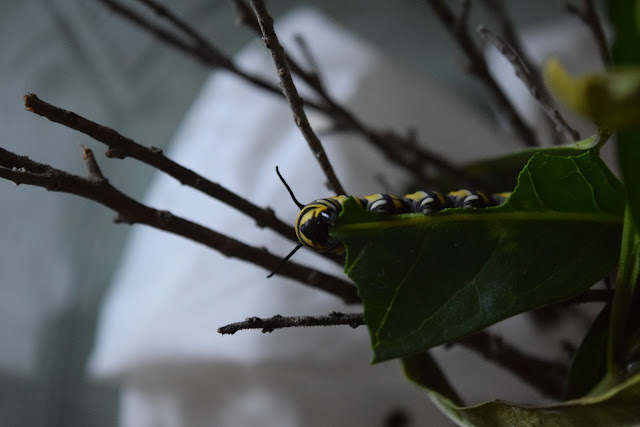 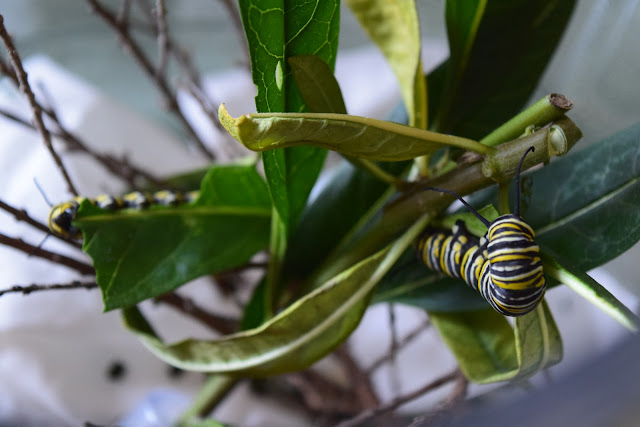 In the process, I am learning much more than I expected about caterpillars and change. The only transformations I had ever heard about were from caterpillar to chrysalis to butterfly, but the truth is even richer in application to the Christian's journey of sanctification.

The monarch's life cycle begins as an egg, which looks as little like a butterfly as a seed does a flower. It grows into a very tiny caterpillar, which eats very tiny holes in the milkweed leaves. The tiniest at our first notice was 1/4" long. 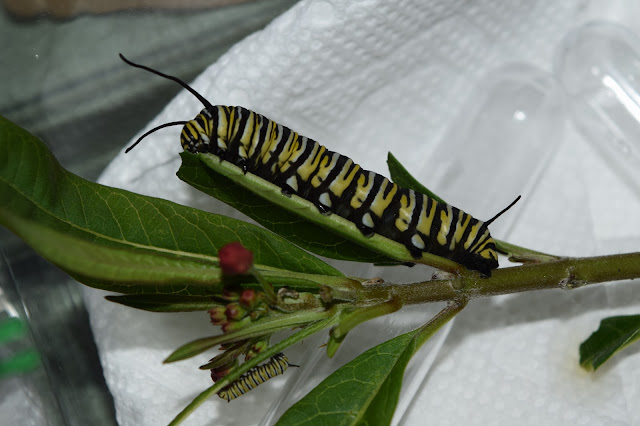 It eats and eats and grows and grows, until it outgrows its skin and molts. Then it eats its old skin before returning to the milkweed diet. Yes, really. Nothing is wasted in God's economy.

The caterpillar undergoes several of these transformations, but time after time it sheds its old caterpillar skin, only to reveal a new caterpillar beneath.

All the while, it is fully and completely a monarch butterfly in larval form.

Sometimes I think I know how that feels. From the moment of my salvation, I have been completely "in Christ," and He in me. My identity is fully and completely His blood-bought child (Gal. 2:20). The New Testament teaches that I am and have been sanctified, "perfected," even (1 Cor. 6:11; Hebrews 10:10, 14). It also teaches that I "am being sanctified" and have not yet laid hold of that for which Christ laid hold of me (Hebrews 10:14; Philippians 3:12).

By the grace of God, I feed on His Book, prayer, worship, and the fellowship of the saints. I grow and grow. Sometimes it looks like nothing is happening for a while, and sometimes there's a painful growth spurt which strips me of some part of the old me, what Paul calls "the flesh" or "the old man."

Yet underneath, my caterpillarishness remains.

This is where Amore laughed and said, "So how exactly does eating its own skin fit into the spiritual parallel?"

Initially, I said that it's a parable, not an allegory, and we make trouble when we try to squeeze every little detail for meaning in a parable. On second thought, I realized that God wastes nothing from our past experience. He causes even my sins and flesh patterns to work together for good and His glory. He's that masterful. Every bit of the old me that I shed has some part to play in my future growth and fruitfulness, perhaps in increasing humility and conscious, abject dependence on the Lord, perhaps in equipping me to communicate His grace to someone else struggling or suffering as I have.

The caterpillars grow and grow and transform incrementally. After some days of this cycle, they stop eating and become restless. Eventually, they stretch out to their full length, upside down, on a somewhat horizontal surface like a twig or the top of the enclosure and remain motionless for hours.

During that time, they are making and attaching a tiny pad of sticky silken thread to which to attach themselves for pupation, the transformation from caterpillar to chrysalis. The caterpillar extrudes a small bundle of prickly black spines from its tail end. After embedding these securely into the silk pad, it hangs by its tail in a "J" shape. The whole arrangement looks far too fragile to stake a life upon. 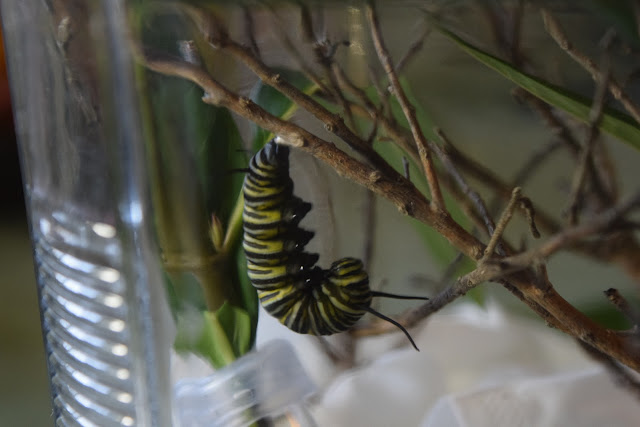 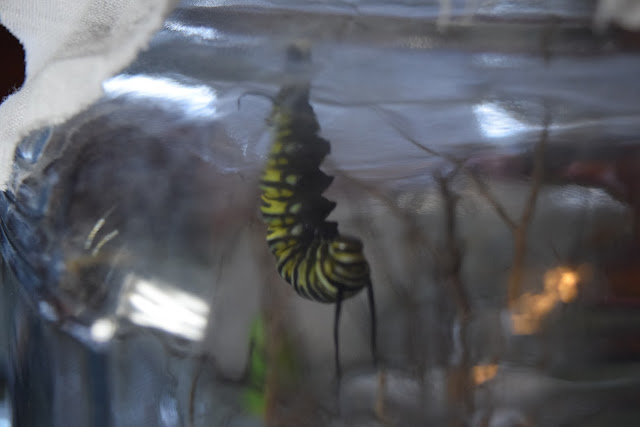 They hang there, nearly motionless, for around 24 hours (in the case of our first 4 transformations). During that time, the white stripes take on a greenish tinge and the caterpillar seems to grow fatter. We are learning that when the "J" relaxes into a straighter line and the antennae dangle limply, the transformation is about to happen.

Waves of muscle contractions visibly move upward from the head to the tail. These build until the final veneer of caterpillar skin splits behind the head. The rupture extends upward, the caterpillar scrunches off the too-tight skin, and a pupa much larger than the caterpillar emerges. The only analogies I've thought of from human life are inching off a compression sleeve or a pair of nylons at the end of a summer day and a surgeon cutting clothing away from an injured limb.

If you wish to watch the seven-minute process, here's the video we took of Alpha's pupation:

Contrary to my expectations, monarch caterpillars do not spin or even secrete a cocoon. The chrysalis that houses the adult butterfly grows inside the caterpillar and has only to come out. In so doing, the breach with its old caterpillar life is complete and irrevocable.

Over the next several hours, this pupa contracts and hardens into a beautiful, jade-green chrysalis with gold markings. Two gold dots at the bottom cover the butterfly's eyes within. The caterpillar is no more, but the butterfly remains enshrouded for days to come. 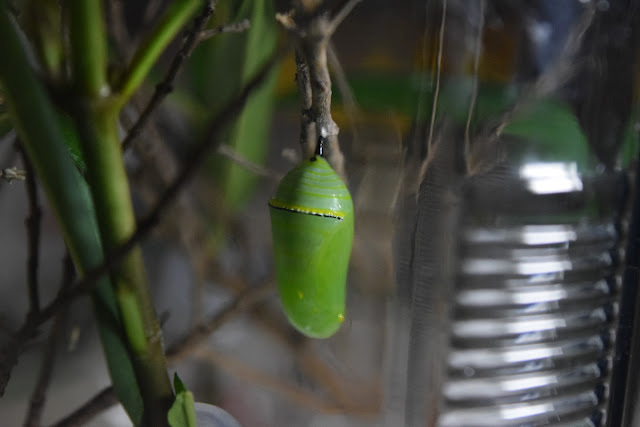 Reportedly, if the chrysalides stay healthy, we should have 4 adult monarch butterflies emerging over several days, beginning around Thanksgiving. We will do our best, God helping us, to keep the remaining small caterpillars alive as long as the milkweed holds out. The adult butterflies will need up to a day for their wings to harden. Then we can release them into the garden. If the weather remains warm and gentle enough, they may reunite with the rest of their number in their wintering grounds in Mexico.

My transformation and yours will be measured in longer terms than days. The exact day and hour God knows. We who are in Christ Jesus by grace through faith can rest assured, however, that a day will come when we put off our caterpillarishness for good and find our wings. No longer hindered by that "old man" or "old woman," we will be like our Lord, for we shall see Him as He is, and what a glorious day that will be (1 John 3:2).

Lord willing, there will soon be a sequel to this post with our batch of butterflies. Until then, keep growing, my crumble friends. Crawl on, and don't lose heart. Your change is coming.