Once upon a time, an ordinary woman sat down at her ordinary kitchen table to eat an ordinary lunch. She had written an emotional letter that morning and felt sad and spent. Through the blinds and out the window, an extraordinary color caught her eye. That flash of light blue and white on top of the swingset-become-garden-structure didn't belong there. Had a fragment of someone's plastic grocery bag blown up there?

She parted the blinds to look and saw an extraordinary sight: a blue parakeet. 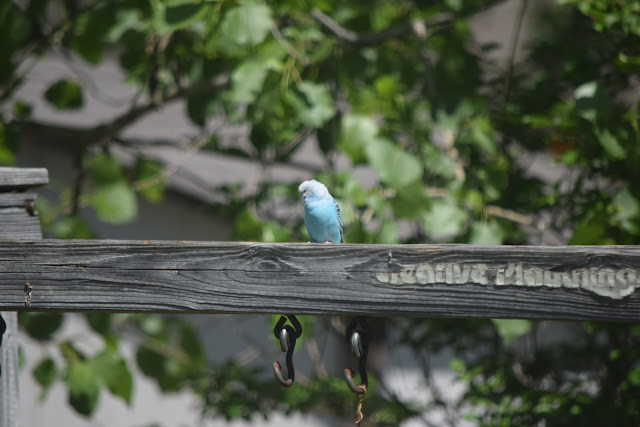 In another ordinary home in this ordinary neighborhood, an ordinary family's pet bird was out of her cage. Maybe her cage was being cleaned. Maybe she was socializing with her family. A door opened to the wide, extraordinary world beyond, and out she flew.

Out the door, over the fences, through the trees she flew, until she landed on this woman's swingset.

The woman went out to look, and the parakeet allowed her to approach quite close. 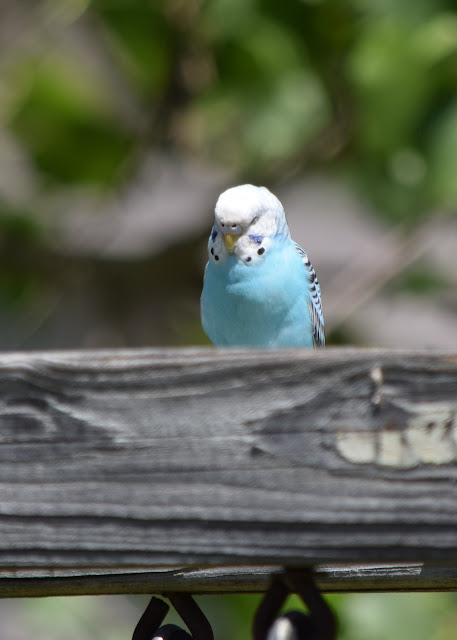 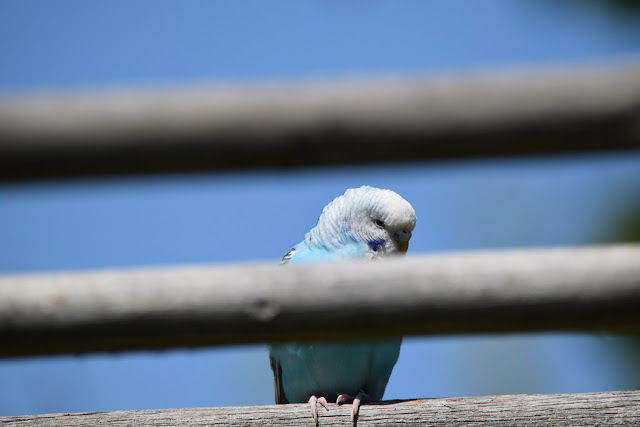 The bird wasn't sure if this woman were friend or foe. It tilted its head first this way and then that way. It took three side-steps to the left, then to the right, back and forth and back and forth. Then it flew away, but it didn't fly far. 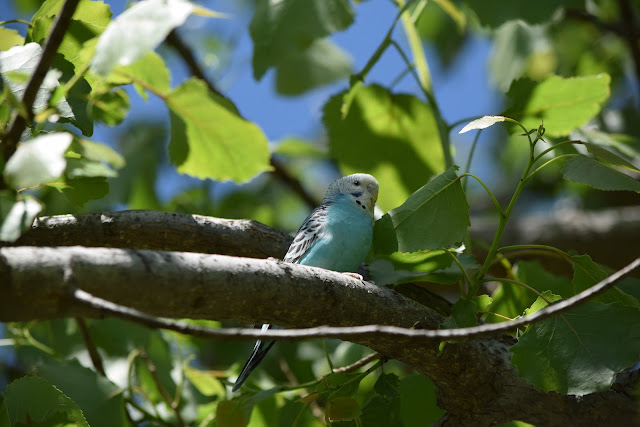 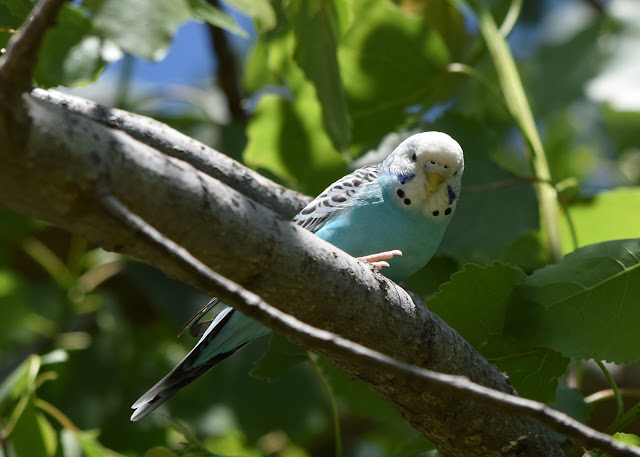 The woman didn't want to frighten it, so she scattered some seed on the patio and went back inside to watch. The bird stayed in its new perch in the poplar tree.

After a while, when the other birds came to eat their lunch, the parakeet came, too. 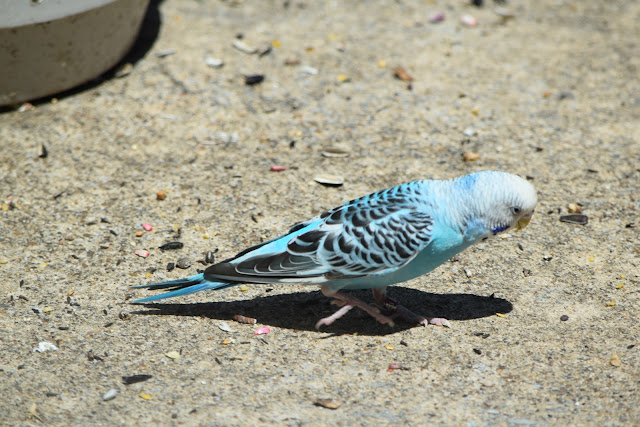 The parakeet, which showed by the white ridge above its beak that it was a girl parakeet, liked the woman's birdseed. It ate and ate and ate, and then it flew back to the top of the swingset and later to the tree. 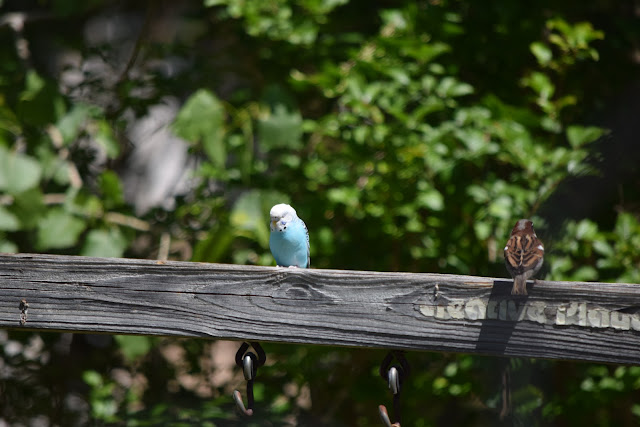 When the woman's husband came home, he tried to make friends with the parakeet, but she wasn't sure about him either. This time she flew off into the crape myrtle, just far enough away to stay safe but near enough to keep an eye on him. 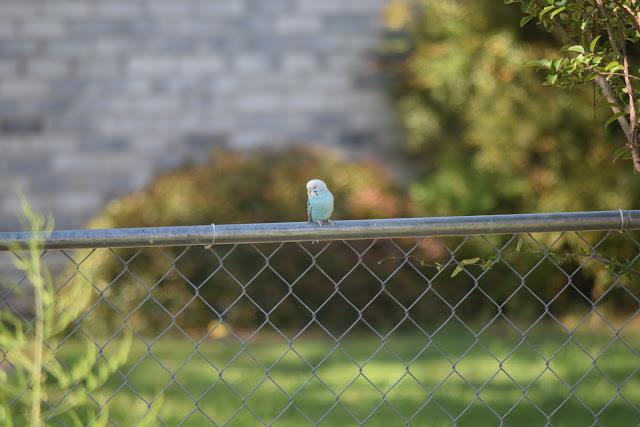 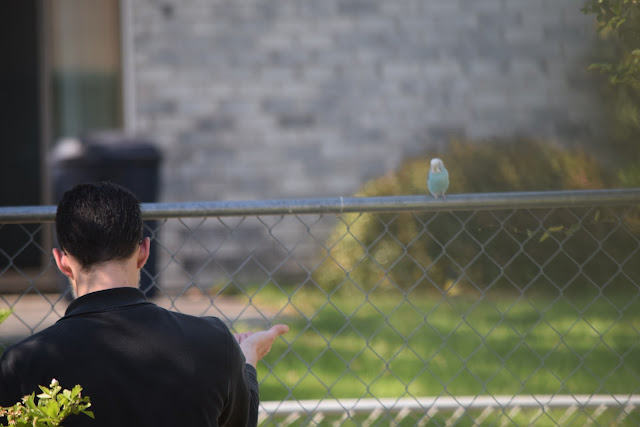 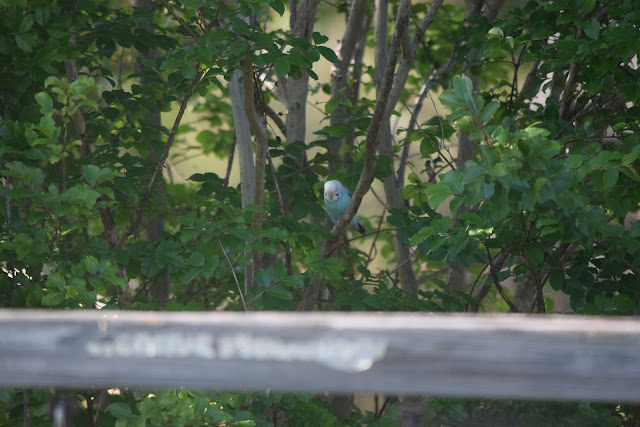 As the sun declined in the western sky and all the wild birds came to eat supper, the parakeet came too. She really liked the seed here. 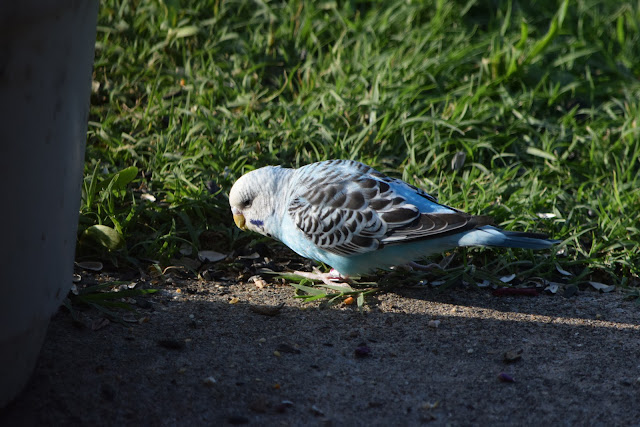 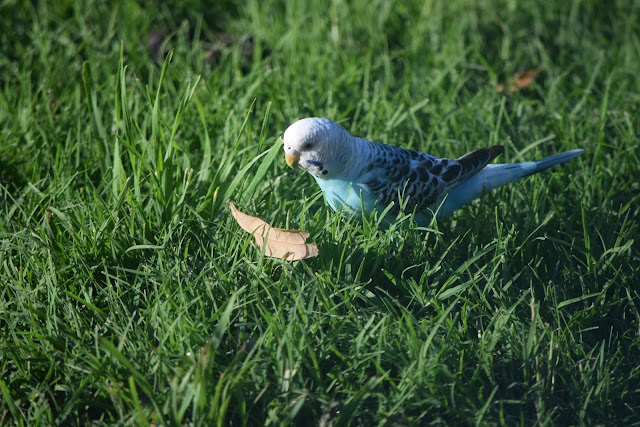 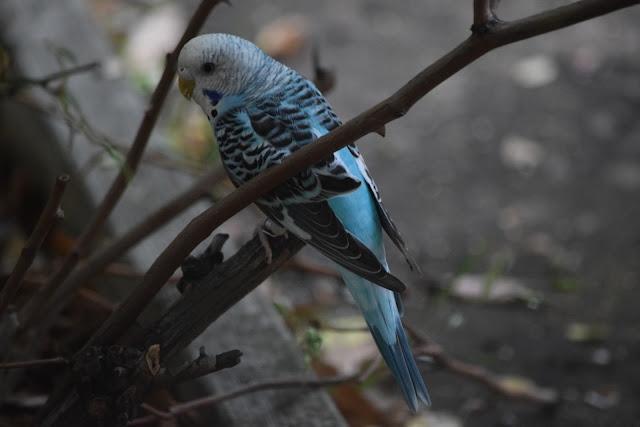 She flew back into the poplar tree, and the woman wondered where she would spend the night. She had made some phone calls to try and find the pretty bird's family, but so far without success.

The next morning, the woman went back to the kitchen window when the sun rose. She was holding her breath to see if the parakeet had survived the night. When the cardinals, the finches, and the sparrows came to forage for their breakfast, the parakeet came too, then returned to the poplar she liked. All that day, and the next, and the next, the parakeet rested and ate in the woman's backyard. 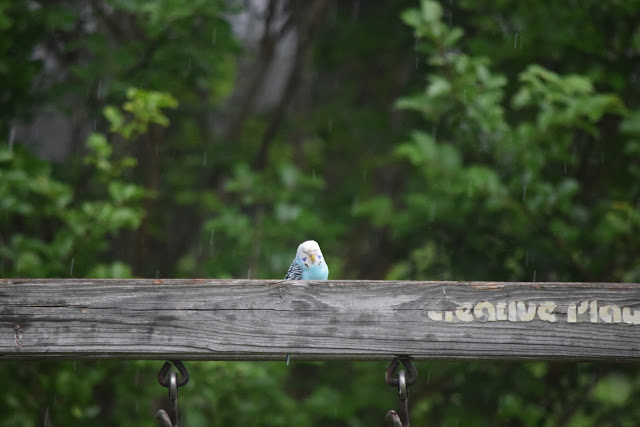 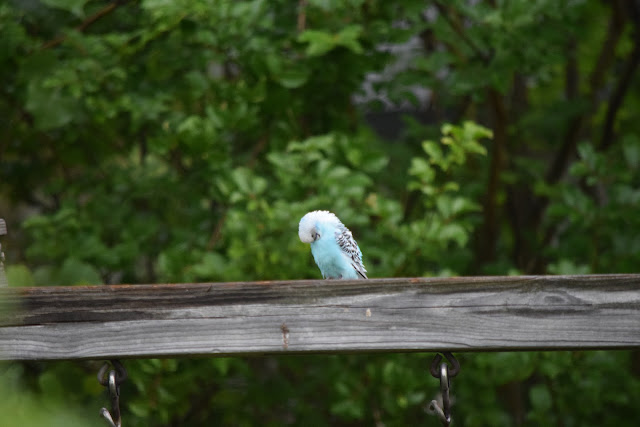 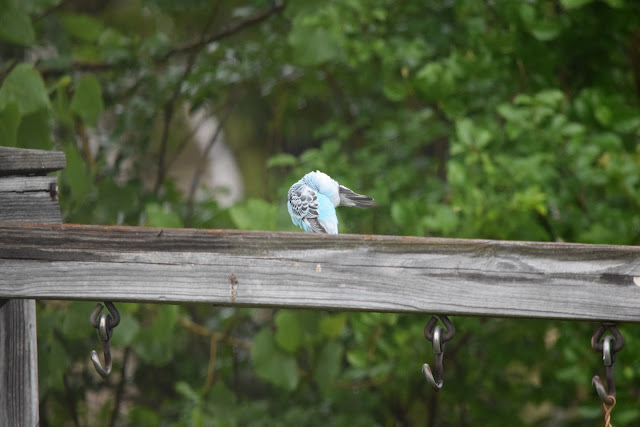 The woman decided that, as long as the parakeet was living in her garden, the parakeet needed a name. She said so to her husband. He was not surprised. He had lived with the woman long enough to know she loved finding names for things.

They considered Tiffany, because of her beautiful blue color, and Juliet, because of its elegance, but nothing quite fit. Then the woman knew.

"Lucy," she said. "We must call her Lucy, Lucy the Valiant, like the queen of Narnia. Our back garden isn't exactly Narnia, and she flew out an ordinary house door, not a wardrobe door. All the same, she left her comfortable, known, safe world, passed through a doorway, and entered a world with temperature swings, uncertain shelter and supply of food and water, and all kinds of dangers. She has survived thunder, rain, cats, hawks, and germs she couldn't have imagined before. Yes, Lucy. That will be her name while she's here." 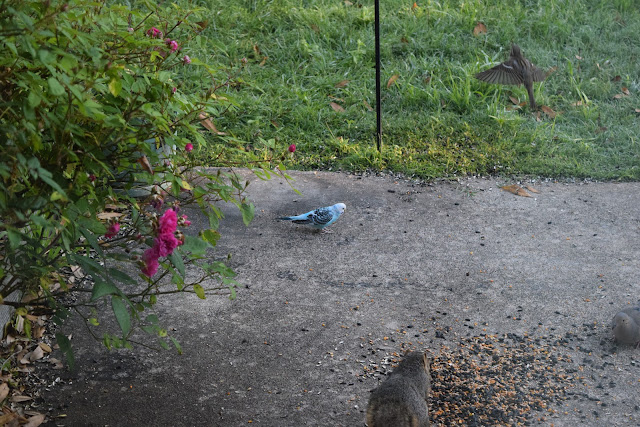 For eight days Lucy the Valiant lingered in the garden, coming to the porch to feed whenever the doves and sparrows and chickadees did. The woman thought how this parakeet in a world of sparrows was a bit like the Christian in this life: in the garden, but not of the garden; a pilgrim far removed from her true home. Lucy's courage and grit encouraged the woman to be a little braver, too.

On the ninth day, the woman didn't see her in the morning or at noon, but Lucy returned in the late afternoon and evening to feed. On the tenth day, the woman once saw a bright, pale flash flying between two neighbors' trees, and that might have been Lucy, but she never came back to the woman's yard again.

The woman worried some but tried not to. The same God who had sustained Lucy through the early days of her pilgrimage, the same extraordinary God who saw an ordinary woman's heavy heart and sent a blue parakeet to lighten it, could sustain her still. She could have been reunited with her family. Lucy could have expanded her territory as her flying muscles strengthened and found a yard with a better supply of water as well as food. The woman may never know.

If Lucy ever returns to the woman's yard, however, she will have a friend there.
Posted by tinuviel at 6:00 AM